Brexit by numbers: the figures behind the finality 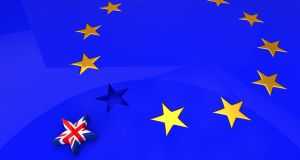 18: The number of months the two sides have to agree the terms of Britain’s exit. Photograph: iStock

1: The amount of times Article 50 has been used since its creation in 2009. Nobody really knows what will happen next.

2: The duration in years for initial talks on formal divorce proceedings.

51.9: the percentage of the British public who voted in favour of leaving the EU last June.

44: The duration in years of the UK’s membership.

10: the negative percentage difference of the pound against the euro since last year’s referendum result (sterling lingers at about 15 per cent lower against the dollar in the same timeframe).

1.8: the percentage growth of the UK economy last year, despite some predictions of early post-Brexit depression.

€60 billion: the potential bill it now faces for leaving.

48: The number of hours Donald Tusk will have to respond by circulating draft EU negotiating guidelines.

3 million: the number of EU nationals living in the UK.

900,000: the approximate number of UK nationals living elsewhere in the EU (it had previously been estimated at about 1.2 million). The future of UK and EU citizens’ rights will be priority items during Brexit talks.

499: The length in kilometres of the Northern Ireland border, over which there are serious concerns about the potential re-emergence of a hard border.

700: the number of administrative issues which need to be untangled before Britain can leave, according to Whitehall estimates.

30: The number of national and regional parliaments which must rubberstamp a post-Brexit trade deal.

18: The number of months the two sides have to agree terms.

6: The crucial number of months – from October 2018 to March 2019 – the leaders of the European commission and parliament will comb through and ratify the deal.

10: The number of years, however, which could constitute a “reasonable” period of time for the UK and EU to remain on special trading terms while negotiating this new deal, keeping in line with lesser known World Trade Organisation rules.

1 Will brother’s widow get half of our parents’ estate when they die?
2 Banks face ‘hectic’ loan restructuring as payment breaks end, Goodbody warns
3 Should I switch bank now with Ulster Bank at risk of closing?
4 House insurance: save yourself money by reviewing your policy
5 ‘I have three children and a dog, so I feel like a bit of a human ATM’
6 EU said to be leaning towards appealing Apple tax decision
7 Finance Ireland refinances mortgages with low level of payment breaks
8 Belfast mailbox address used by account holder in Russian money-laundering scheme
9 Irish household wealth grew by €76,000 in years following crash
10 EU watchdog calls for end to Covid loan payment breaks
Real news has value SUBSCRIBE