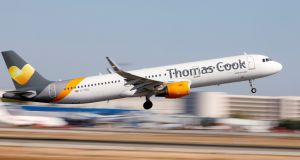 Thomas Cook shares lost a quarter of their value on Friday and bonds hit a record low after Citi downgraded its rating to “sell” and cut its target price on the stock to zero, in the wake of the company’s latest profit warning.

Shares in the world’s oldest travel company, battered by fading demand for its package holidays and high levels of debt, hit 12.1 pence, their lowest since July 2012, and were on track for their biggest one-day drop since November 2011.

Thomas Cook issued its third profit warning in less than a year on Thursday, saying discounting and higher fuel and hotel costs would hurt it during the peak summer season.

The company’s gloomy outlook was echoed by British budget airline easyJet, which on Friday said it sees a worse trading environment than last year as worries over Brexit and economic weakness in Europe hurt consumer demand.