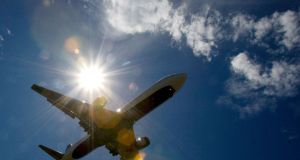 Delta Air Lines apologised on Thursday after a couple said they were kicked off an overbooked flight with their two toddlers so their seats could be given to waiting passengers.

Delta Air Lines said in a statement it was “sorry for the unfortunate experience” a day after Brian and Brittany Schear posted a video online showing them being told to leave a flight or be arrested during a dispute over a seat they had bought for their teenage son.

“Delta’s goal is to always work with customers in an attempt to find solutions to their travel issues. That did not happen in this case and we apologise,” said the airline.

It said it had contacted the couple to refund their travel and provide additional compensation.

The apology came the same day members of a US senate committee held a hearing on the industry’s customer service failures and issued harsh criticism of airline fees, disputes with passengers and the lack of competition in the heavily consolidated sector.

The video posted on YouTube by the California couple shows Brian Schear arguing with a police officer and a Delta employee as he sat on Flight 2222 waiting to depart from Maui, Hawaii, to Los Angeles.

Kicked off the flight

The dispute was about whether Mr Shear was allowed to use a seat he had originally purchased for his teenage son for his toddler son, and whether the toddler needed to be in a car seat or sit on the lap of an adult.

“You will hear them lie to me numerous times to get my son out of the seat. The end result was we were all kicked off the flight,” Mr Shear wrote in the caption. “They oversold the flight. When will this all stop?”

The Schears stayed at a hotel before flying home the next day.

The Delta incident came nearly a month after United Continental Holdings sparked outrage when a passenger was dragged off an overbooked flight by his hands. The airline reached a settlement with the passenger last month.

Southwest Airlines Co said after that incident it would stop overbooking its flights.American Airlines Group experienced another public relations fiasco last month when a video showing an onboard clash over a baby stroller went viral. – Reuters