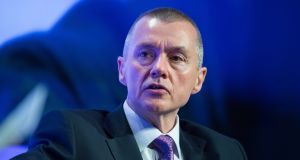 IAG chief executive Willie Walsh: said it was a “record performance” in the first quarter

However, the three month period was categorised by “increasing fuel prices” and a stronger US dollar against both the euro and sterling, which adversely affected the company’s operating profit by €32 million.

“We’re reporting an operating profit of €170 million before exceptional items which is up from €155 million compared to last year,” said Mr Walsh.

“This is a record performance in the first quarter, traditionally our weakest quarter, with the improving trend in passenger unit revenue continuing.

“The impact of currency exchange was €32 million in the quarter due to the translation of sterling profit into euros.

In the first three months of 2017, IAG capacity was higher by 3.3 per cent with increases across all regions.

Aer Lingus “continued its growth” across the north Atlantic, while Vueling grew in Spain, partially reducing its seasonality.

British Airways launched new routes including Santiago in Chile and Oakland in California, and discontinued its route to Chengdu, China.

Passenger revenue decreased 4.2 per cent compared to the same period last year. Other revenue was up 13.7 per cent or €64 million excluding currency impacts.

Employee costs decreased 6 per cent compared to the same period last year. The average number of employees rose 1.5 per cent for the company, while productivity increased 1.8 per cent with improvements at British Airways, Iberia and Aer Lingus.

Under exceptional items, IAG noted a charge of €19 million related to the “continuation of British Airways transformation initiatives”.

Net non-operating costs were €116 million for the quarter compared to €44 million in 2016.

The tax charge for the period was €8 million after exceptional items, with an effective tax rate for the company of 23 per cent.

The profit after tax and exceptional items for the quarter was €27 million, down from €104 million the year before.

Neil Wilson, senior market analyst at ETX Capital, said the figures were “highly impressive” and “well ahead” of expectations for what is the quietest time of the year for airlines.

“IAG has been able to navigate its way through stormy conditions last year, posting a 31 per cent rise in annual profits in February, so this is continuing the trend and means it’s on track to live up to expectations that this year will be even better than last,” he said.

However, Mr Wilson flagged that an area of concern is passenger unit revenue, which was down 7.2 per cent for the quarter, with Brexit also threatening aviation agreements for British airlines flying into the EU.