A no-deal Brexit is on the cards, but what would that mean for everyday life?

‘If there are delays in France, you’ll see it sooner or later on the M50’

Boris Johnson has said Britain “will have a solution that's much more like an Australian relationship with the EU, than Canadian.” Australia, unlike Canada, has no comprehensive trade deal with the EU, leaving its trade mostly subject to tariffs. 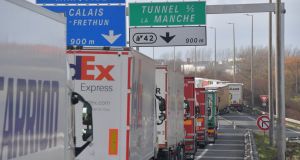 The A16 highway between Dunkerque and Calais in France shows trucks heading to the Channel tunnel stuck in a traffic jam due to extensive controls by the customs officers protesting against the lack of staff and material ahead of the Brexit. File photo by Philippe Huguen/AFP/Getty

Another Brexit deadline has been set – this time for Sunday. With big gaps remaining, both sides are warning about the risk of no-deal outcome. Whatever happens, there will be disruption and change on January 1st, but if there is no trade deal it would be significantly worse.

We are likely to be looking at TV pictures of big queues at ports as the new system for trade between EU and UK is introduced. This may happen even if there is a deal, but is likely to be worse without one as it would introduce the need for more checks and mean co-operation between the two sides to smooth things out is less likely.The worst queues are likely entering UK ports like Dover as trucks head for the continent, as they will face new checks as they leave and as they enter continental ports. Combined with the need for new checks at Irish ports, the knock on from this could lead to significant tailbacks heading out of Irish ports and on to main routes like Dublin’s M50 road. “If there are delays in France, you’ll see it sooner or later on the M50 at Finglas, ” one Irish source observed.

2. Hasn’t the EU published plans today to try to deal with a no-deal scenario?

Yes. But they are fairly basic. Because the airline safety and regulation regime for flights between the EU and UK would fall if there is no agreement, the Commission has agreed a six-month extension to allow something to be worked out. The same applies for rules covering road hauliers and coaches moving across the English Channel. But there is no suggestion of any leeway on implementing new customs rules or tariffs from Brussels – bar an agreement to phase in changes on movements between Britain and Northern Ireland agreed under a separate protocol (read our explainer on the Northern Ireland protocol here). And it is the customs and tariff changes between the EU and UK which will complicate things for businesses and lead to costs and delays, The EU has also proposed continued reciprocal access to fishing waters on both sides for a period. Whether further contingency measures might come if there is no agreement remains to be seen. Would the EU try to find some way to avoid chaos at the ports? Legally this would be difficult as the transition period cannot be extended. But you would be surprised if somewhere, quietly, the options wern’t at least being examined.

3. So will there be delays in deliveries to Ireland and empty shelves?

There could indeed be disruption for a period – and this would be likely to be worse if there is no trade deal . Major companies, including those in time sensitive sectors like the grocery trade, have been planning for this, supply chains have been reorganised and warehouses are full with stockpiled goods . But you can’t stockpile fresh food and many other products have a shelf life. You would hope this would be temporary and new direct ferry routes from Ireland to the Continent should help, albeit that the additional time taken and cost is a problem in many cases. There could also be problems in some specific food areas due to regulatory problems, for example for some prepared meals.

This is an area where there is a significant difference in a no trade deal scenario. This is because it would lead to the imposition of tariffs, or special import duties, on goods entering Ireland from Britain, particularly food and grocery items. An ESRI report has estimated that if these tariffs are passed on to consumers – and generally tariffs are – then in addition to the costs coming from new delays and customs procedures, grocery bills could go up by up to €1,360 a year, a rise of more than 3 per cent in prices. Less well-off households, who spend proportionately more on grocery products, would suffer most. Increases would be seen in the price of cereals, meat, processed foods, jams, confectionery, chocolate, coffee and a range of other items. There are also tariffs on clothing and shoes – pushing up prices of UK imports here, including for those who shop online from UK outlets.

The unprecedented nature of Brexit make it hard to judge, but the Government estimates that in a no-deal situation growth next year would be three percentage points lower than it would otherwise be, mainly because exports to the UK would be lower. The Government budget for 2021 is based on a no-deal assumption. This cost is around €10.5 billion in cash terms and estimates by the Irish Fiscal Advisory Council are that the longer-term costs could be about twice this.

Brexit will hit specific sectors – including agri-food and notably the beef sector and products like cheddar cheese. Tariffs will be applied on Irish goods entering the UK, cutting profits and in some cases pushing Irish products out of the market. Tariffs on beef can exceed 70 per cent in some cases.The Department of Agriculture believes the hit to jobs will be largely confined to agrifood and some manufacturing sectors, though it is hard to say. Some companies are very reliant on UK supply chains so disruption here could have a cost too.

6. What will the Government do ?

The Government will unveil its no-deal contingency plans soon enough unless the talks are on track. Tánaiste Leo Varadkar has said plans are being put in place to help affected companies, though won’t say yet what they are. An extension of wage subsidies paid to firms hit by the pandemic look certain, and other supports will also be rolled out. The Government will also be trying to grab a share of a €5 billion EU Brexit fund – the only specifics mentioned by the EU today on the fund are that one of the sectors it will target is fisheries, where France will look for funds but Ireland could too. Expect to hear a lot from food, fisheries and farming representatives looking for State assistance if there is a no deal.