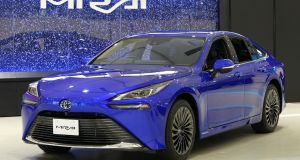 Toyota unveiled a sleeker and longer-travelling version of Mirai, its hydrogen-powered car, but what it’s targeting isn’t sales. The automaker sees the futuristic vehicle as a bridge to a difficult-to-realise future society that runs on hydrogen.

Toyota’s release of the world’s first mass-produced hydrogen fuel-cell vehicle (FCV) in 2014 was a leap in technology – the Mirai takes in hydrogen gas, charges in under five minutes and travels as far as a petrol car while only emitting water vapour. Yet over the past six years, only about 11,000 of the cars have been sold in a market growing increasingly crowded with battery-electric vehicles.

The second-generation Mirai quells many of the issues of its predecessor. Toyota increased the car’s range by 30 per cent to 850 kilometers (528 miles) per charge by adding a third fuel tank below the vehicle floor. The aerodynamically improved car is visually more appealing, and comes at a still pricey, but lower, starting price of 7.1 million yen (€56,000). Toyota has said it’s aiming for a tenfold increase in the number of Mirai on the road with its second-generation.

Even so, given the slow uptake and lack of hydrogen refueling stations in Japan, the question is why Toyota keeps pushing forward with the technology.

“We don’t think it’s important to focus on sales. We have a larger target that is contributing to the realisation of a carbon-neutral society,” Masahiko Maeda, Toyota’s chief technology officer, said at a briefing Wednesday.

Hydrogen has been touted by some as the key that will enable countries to decarbonise some of the most polluting segments of their economies such as refining, heating and transportation, where the fuel can be used to replace gas and diesel. Hydrogen itself carries three times as much energy per unit weight as petrol. And it can be produced anywhere with electricity and water – potentially releasing no carbon emissions in the process if the electricity is generated using renewable energy.

But the shift will be extraordinarily expensive. Bloomberg New Energy Finance estimates that generating enough hydrogen to meet a quarter of the world’s energy needs would require an investment of $11 trillion in production, storage and transport infrastructure. This price tag creates a chicken-and-egg situation where suppliers of infrastructure such as charging stations and the fuel itself are reluctant to invest in scaling up operations enough to bring costs down. In turn, consumers and companies are unwilling to commit to hydrogen-fueled products because of the cost and lack of infrastructure.

In the transport sector, this dilemma manifests most directly in the lack of hydrogen fuelling stations. Operators are hesitant to invest in new stations as a growing number of auto majors such as Mercedes-Benz, Ford and General Motors, pivot away from FCVs. Last year, there were only 432 largely publicly funded hydrogen refueling stations operating globally, which poses a problem for Toyota as it invests heavily in developing fuel-cell systems for trucks, buses and commercial vehicles.

Toyota’s goal when it comes to the second-generation Mirai “is to be that first step toward wide-spread adoption” by encouraging demand for hydrogen production and charging stations, according to Toyota’s Maeda.

“In the bigger story of reaching a carbon neutral society, we are just trying to spread a product, or in other words a tool, that makes it easier for as many people as possible to use hydrogen in their daily lives,” Maeda said. – Bloomberg