Troubled carrier has filed for bankruptcy protection in Ireland 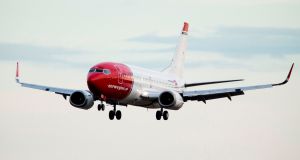 Norwegian Air, which has filed for bankruptcy protection in Ireland, has reported a 95 per cent collapse in passenger numbers in November.

The troubled carrier said 124,481 customers flew with it last month as travel restricions across Europe continued to decimate air travel.

The airline is flying just six of its aircraft, as the pandemic has grounded the remaining 134.

“The pandemic continues to have a negative impact on our business as travel restrictions remain,” chief executive Jacob Schram said.

“ The development of vaccines is great news for the airline industry, and we look forward to welcoming more customers on board as travel restrictions are lifted,” he said.

“ Our goal is to be a financially strong and competitive airline, with a new financial structure, a right-sized fleet and improved customer offering,” he added.

Norwegian Air asked Irish High Court last month to carry out a process of examinership as its subsidiaries here hold most of its aircraft.

The carrier and five Irish subsidiaries, which hold 72 of its 140 aircraft, will ask the court next week to extend their protection from creditors for up to three months and confirm the appointment of KPMG partner Kieran Wallace as examiner.

On Thursday the Oslo-based carrier said it aimed to raise up to 4 billion Norwegian crowns (€375.3 million) from the sale of new shares, state aid and some loans.

It is also proposing to swap existing debts, owed mainly to aircraft lessors and banks, for shares in the carrier.