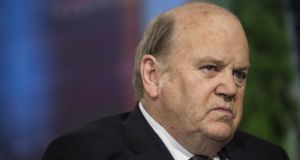 Michael Noonan: said the ISIF was considering other investment opportunities for the €268 million remaining in the fund. Photograph: Victor J. Blue/Bloomberg

The State is loaning more than €10 million of the €335 million raised from the sale of Aer Lingus to Shannon Airport to aid it in upgrading its runway.

Shannon Group intends relaying the airport’s runway this year and it plans to begin the work this summer.

The State’s Irish Strategic Investment Fund (ISIF) will loan more than €10 million to Shannon to carry out the work from a subsidiary pot established with the €335 million that the Government received for the State’s 25 per cent share in Aer Lingus following the airline’s sale in 2015.

The Government put the Aer Lingus cash into a special “connectivity fund” earmarked for projects in areas such as aviation and communications that are designed to boost the Republic’s links with the rest of the world.

Shannon recently said the cost of the runway overlay would come to €15 million. The ISIF contribution is said to be more than €10 million, which means that the State fund is loaning most of the money required.

Neither the airport’s operator, State-owned Shannon Group, or the ISIF, would comment on the deal. The runway relaying is part of an overall €44 million investment plan for the mid-west gateway.

Shannon Group is planning to cut costs in tandem with spending this money and recently offered staff aged over 55 voluntary early retirement as part of a plan cut employee numbers.

To facilitate the five-year investment programme, it is also reducing the status of the airport to category seven from category nine, which will limit the number of larger airlines that can fly there.

Shannon’s runway will be the third project to benefit from the Aer Lingus cash. Since it was established, it has committed €22 million to Aqua Comms, Ireland’s dedicated transatlantic broadband cable, and bought €35 million worth of bonds issued by DAA, operator of Cork and Dublin airports.

Responding recently to questions from Fianna Fáil TD, Dara Calleary, the Minister for Finance, Michael Noonan, many of whose Limerick city Dáil constituents work in Shannon Airport, said the ISIF was weighing other opportunities for the remaining €268 million.

Mr Noonan said that they would include investments in businesses seeking to expand the Republic’s international links.

The ISIF is meant to invest in projects that will create jobs and deliver a commercial return to the State.

The Government established the fund with the €8.1 billion, the money left in the national pension reserve after the 2010 bail out. The National Treasury Management Agency is is responsible for it.

International Airlines Group bought Aer Lingus in September 2015, paying €335 million for the State’s 25 per cent strategic share. One of the commitments that the Government made in order to get political backing for the sale of the stake was to create the connectivity fund.