Passenger numbers up 10.3%, with majority of travellers passing through Dublin airport 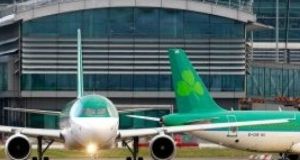 The number of people passing through Irish airports rose 10.3 per cent last year to 32.9 million, new figures from the Central Statistics Office show.

According to the latest data, passenger numbers rose at all Irish airports except Waterford. More than 247,000 flights were handled by Ireland’s five main airports last year, of which 204,563 were via Dublin. Cork handled 19,908 flights, equivalent to 8 per cent of the total.

In Shannon, the main routes were London-Heathrow, London-Stansted and JFK in New York.

Last year almost nine out of every 10 passengers on international flights in the five main airports were travelling to or from Europe. The two most popular countries of origin/destination were Britain and Spain.

Ireland’s main airports handled a total of 146,829 tonnes of freight in 2016, almost all of which was for export.

Dublin Airport’s operator, State-owned DAA, recently announced that a record 2.2 million people used the gateway in March, 2 per cent more than during the same month in 2016.