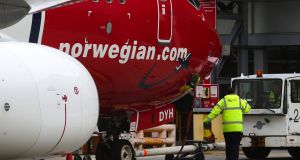 Norwegian will begin low-cost services from Ireland to the US in July. Photograph: Chris Ratcliffe/Bloomberg

IAG launched the new Barcelona-based airline in March and plans to begin flying to Los Angeles and San Francisco in the US, Buenos Aires in Argentina and Punta Cana in the Dominican Republic from June.

The move is designed to combat the launch of cheap transatlantic services by airlines such as Norwegian Air International, which will begin services from Ireland to the US in July, and Wow, which offers flights from the Europe to north America via Rekjavik.

Mr Walsh said over the weekend that bookings on its site, flylevel.com, were strong, with more than 50 per cent of customers in the key 18-34-year-old age group. “So it’s an interesting demographic,” he told CNN’s Quest Means Business.

Speaking to the same programme, commentator Ben Schlappig, editor of travel blog One Mile at a Time, said that it was a case of “monkey see, monkey do”.

He said the threat posed by Norwegian and Wow was such that British Airways, one of IAG’s other three airlines, had “no choice” but to follow with a low-cost carrier of its own.

He said there were also suggestions that British Airways could introduce paid-for meals on its transatlantic economy flights in the same way that Norwegian is already doing.