Ryanair talks with union due to restart today 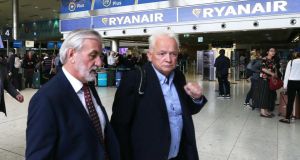 Talks to end the dispute between Ryanair and a group of its Irish pilots are due to restart on Wednesday following their adjournment last weekend.

About 100 of Ryanair’s 350 Irish-based pilots have staged five one-day strikes at the company since the beginning of last month in a dispute over base transfers, promotions, leave and other issues.

The Irish Airline Pilots’ Association (Ialpa) – part of trade union Fórsa – has pledged not to serve notice of further strikes on the airline while mediation is under way.

Both sides have also agreed not to comment on the progress of the talks in public.

There was no indication on Tuesday how close they are to resolving the dispute, but hopes were high last week that Mr Mulvey’s involvement would help break a deadlock that has lasted for six weeks.

Ialpa-Fórsa is seeking a transparent system for dealing with the issues in dispute, which are tied to seniority.

Ryanair maintains that it has agreed to nine of the 11 demands originally laid down by the union.

Disputes have also broken out in recent weeks between Ryanair and pilot unions in Belgium, Germany, Holland and Sweden.

1 ‘No demand... because there are no people’ at well-known Dublin pub
2 Stripe lures Dhivya Suryadevara from General Motors to be CFO
3 Nearly 30,000 could lose pandemic payment if they do not confirm eligibility
4 How to . . . move (almost) everything to your new phone
5 AIB concedes Covid mortgage policy was ‘regrettable’
6 Divorce: What will it cost and can you afford it?
7 Revised help-to-buy scheme opens for applications
8 Digital Hub warns of need for emergency funding from State
9 MSD buys Takeda biologics plant in Dunboyne
10 Buying a second home now that we work from home
Real news has value SUBSCRIBE