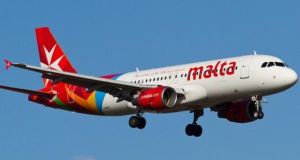 The partnership with Air Malta is the same as the one that Ryanair agreed earlier this year with Air Europa.

Ryanair customers will be able to book flights from Malta to destinations in Africa, Asia, Europe and Russia following a deal struck by the Irish airline.

The carrier said on Tuesday that it has agreed a deal with Air Malta that will allow Ryanair customers fly to 21 destinations in eight countries on its new partner’s services.

The destinations include cities in Austria, Czech Republic, Israel, Morocco, Russia, Switzerland, Tunisia and the Ukraine.

The partnership is the same as the one that Ryanair agreed earlier this year with Air Europa. Under this, passengers can book Air Malta’s flights on the Irish company’s website, but there is no transfer arrangement between the two airlines.

Commenting on the deal, Ryanair chief commercial officer David O’Brien said that it was the latest initiative under the airline’s “always getting better” programme for improving its service. He said that Ryanair offered 53 routes to and from Malta.

Air Malta’s chairman Dr Charles Mangion described the deal as a landmark. “This agreement will also help Air Malta increase its visibility in overseas markets and tap into new revenue streams,” he said.

Meanwhile, in a recent note, analysts at HSBC suggest that striking pilots at Ryanair may win key demands on local contracts, affecting the airline’s ability to move staff around its network.

The airline has endured pilots strikes in five countries, including the Republic, in recent weeks, while last month some cabin crew also staged a one-day stoppage.

“Once it reaches this point it will be the leading European low-cost airline in terms of market share,” they say.

Talks aimed at resolving a dispute between Ryanair and 100 of its 350 Irish-based pilots are adjourned but are expected to continue later this week.