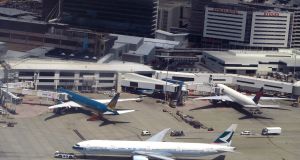 The IATA cut its profit target for the global aviation market this year. Photograph: David Gray/Reuters

The International Air Transport Association (IATA) cut its profit target for the global aviation market this year, predicting lower returns than six months ago as rising fuel prices and labour costs eat into the industry.

The IATA, which represents about 280 carriers, said the industry is expected to post a $33.8 billion (€28.9 billion) profit this year, 12 per cent below a previous forecast of $38.4 billion (€32.8 billion). The new forecast compares with an all-time high of $38 billion (€32.5 billion) airlines made last year, which was boosted by special accounting like one-off tax credits, IATA said.

But passenger yields, a proxy for air fares, are expected to rise by 3.2 per cent this year, the first annual gain since 2011 as a stronger global economy drives growth in demand, IATA said.

North American airlines, with a net profit of $15 billion (€12.8 billion), will contribute the most to the industry’s earnings, apart from posting the highest margins and return on capital, IATA said.

Apart from Africa, all other regions will remain profitable. Carriers in Asia Pacific, the fastest growing region in terms of passengers, will earn $8.2 billion (€7 billion), just behind European airlines’ $8.6 billion (€7.3 billion).

Upturn in interest rates is also another reason affecting profit, the airline group said. Growing uncertainty in global affairs, including a protectionist agenda by some political forces, US withdrawal from the Iran nuclear deal and lack of clarity on the impact of Brexit are risks to the industry’s outlook, IATA said.

While fuel costs top the list of expenses for most airlines, it is wages for US carriers.

Brent crude prices have risen 55 per cent in the past year and touched a 3½ high last month. It’s inevitable that airlines will have to pass some of the fuel burden on to passengers, Mr de Juniac said Thursday in Sydney.

IATA expects an average oil price of $70 a barrel this year, up from $54.90 last year and its previous prediction of $60.

Willie Walsh, CEO of airlines group IAG, which includes British Airways and Iberia, said the high oil price “will put some pressure on airlines that aren’t hedged and who have weak balance sheets and weak P and Ls”.

“It’s going to be an interesting time,” he added.