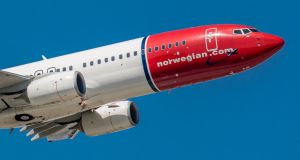 Irish companies Avolon, SMBC Aviation Capital and Goshawk were among those that have agreed terms with NAS and its subsidiaries

Creditors accused Norwegian Air Shuttle (NAS) of putting them under “unreasonable pressure” to settle claims as part of a rescue plan for the troubled Scandinavian airline.

Lawyers voiced concerns at a High Court hearing on Monday, where it also emerged that Irish aircraft lessors Avolon, SMBC Aviation Capital and Goshawk were among creditors that have agreed to settle claims against NAS for aircraft they have supplied to the carrier.

NAS and four Irish subsidiaries are under High Court protection from creditors while examiner Kieran Wallace of KPMG puts together a scheme to rescue the group.

Rossa Fanning, senior counsel for several creditors, including Export Import Bank of the United States, said on Monday that the lender was vigorously opposing NAS’s request that the High Court hear its application to terminate aircraft leases this Thursday, February 18th.

He argued that this “appeared to be a crude attempt to shoehorn something into a wholly unsuitable timeframe in order to put pressure on them to settle”.

Mr Fanning pointed out that the application raised legal questions over jurisdiction and the way in which NAS proposed calculating creditors’ losses.

He also noted that a proposed hearing on Thursday left little time for creditors to respond to various company submissions to the High Court.

NAS wants the court to “repudiate” aircraft leases and contracts, which involves ending these agreements with settlements covering both the period of the examinership and payments due before Mr Wallace’s appointment.

The airline and Irish subsidiaries, Arctic Aviation Assets, Norwegian Air International, Drammensfjorden Leasing and Lysakerfjorden Leasing want to hand back 36 aircraft in all. The group intends cutting its fleet to 68 from an original total of 140.

Brian Kennedy, the Norwegian companies’ senior counsel, said it was genuinely urgent that the hearing take place on Thursday as the group had to take other steps to conclude its rescue, including holding creditors’ meetings and finalising a parallel process in Norway’s courts.

“Every day counts,” he said. Mr Justice Michael Quinn said he would hear the companies’ application to repudiate the leases and contracts on Tuesday, February 23rd, but told creditors they must reply to NAS’s submissions by this Friday.

He will also hear Mr Wallace’s application to extend the examinership by a further 50 days from its current deadline of February 25th, on Friday, which means the process will have taken 150 days in all.

Kelley Smith, the examiner’s senior counsel, confirmed that “it is our intention to bring an application to extend the time beyond day 100”.

Mr Kennedy gave the court details of leases covering 21 aircraft and four engines that have been settled. He asked Justice Quinn to strike out applications to repudiate these agreements.

Irish companies Avolon, SMBC Aviation Capital and Goshawk were among those that have agreed terms with NAS and its subsidiaries. Others include Orix, a shareholder in Avolon, Aviation Capital Group, Australian bank McQuarie and Engine Lease Finance.

Mr Kennedy also noted that the company wanted to withdraw an application to end a deal with aircraft manufacturer Boeing, which will remain in place to ensure NAS can have remaining aircraft serviced if it emerges from examinership.

Proposals to rescue NAS involve cuttings its fleet, its workforce, which numbered 10,000 before Covid-19 struck, ending long-haul services and raising cash from investors.

NAS and Irish subsidiaries have been under High Court protection from creditors since November, when Mr Wallace was appointed as examiner. The group chose the Irish courts as the subsidiaries holding its aircraft are based here.