Airline's Chief Operations Officer Peter Bellew is to step down at the end of the year, according to reports 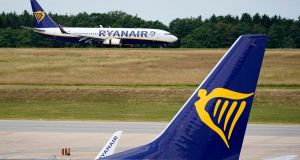 Peter Bellew, Ryanair’s chief operating officer, said that Ryanair has a surplus of 300 pilots and is offering unpaid leave and job shares to pilots over the winter. Photograph: Ronald Wittek/EPA

Ryanair could close bases and is offering unpaid leave to pilots as delays in delivery of new aircraft and tough trading conditions bite.

In a letter to pilots Mr Bellew said Ryanair faces “major challenges” because a delay in the delivery of the new Boeing 737 Max will cut its winter fleet and possibly impact on next summer.

Mr Bellew stated that the problems may require base downsizing and/or closures this winter and next summer, depending on when Boeing 737 Max deliveries start.

Ryanair was due to receive 50 Boeing 737 Max aircraft through the closing months of this year and the first quarter of 2020.

Boeing believes the 737 Max will be airworthy in the autumn, but delivery delays mean Ryanair will be unable to put its craft into service when it originally intended, with a potential knock-on impact on its need for pilots.

Mr Bellew said Ryanair has a surplus of 300 pilots and has stopped recruiting captains as resignations dried up.

He noted that it has offered unpaid leave and job shares to pilots over the coming winter, but says the number of applicants for these options has fallen short.

Separately, Reuters reported on Thursday morning that Mr Bellew is to step down at the end of the year. The new agency said the news was delivered to staff in a memo from chief executive Michael O'Leary. Mr Bellew joined Ryanair in December 2017 after stepping down as chief executive of Malaysia Airlines.