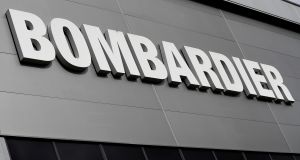 Canada’s Bombardier is selling its Northern Ireland operations, which make wings and fuselages for aircraft including the Airbus A220, as part of a wider restructuring

A specialist Spanish aircraft parts maker has emerged as a potential buyer for Bombardier’s Northern Ireland business, which was put up for sale in May.

Aernnova, which is owned by private equity firm TowerBrook, manufactures wing and fuselage sections and other components for customers including Airbus, Boeing and Bombardier.

It is among a number of companies that have submitted expressions of interest after reviewing an offer document, two people familiar with the process confirmed. Aernnova was unavailable for comment. TowerBrook declined to comment.

Canada’s Bombardier is selling its Northern Ireland operations, which make wings and fuselages for aircraft including the Airbus A220, as part of a wider restructuring. It is one of the North’s largest private sector employers with a local heritage dating back to the 1940s.The sale has attracted interest ranging from strategic buyers to well qualified financial suitors, according to sources close to the process.

US-based Spirit AeroSystems, which has said it will look at acquisitions to diversify its business away from Boeing and its 737 Max, has been tipped as a possible buyer.

GKN, a UK aerospace and automotive parts supplier, has also been cited, although some doubt it would have the appetite given it is implementing a turnround of its business.

US-based Triumph Group, which had been regarded as another potential buyer, is understood not to be in the running. The company said in May it was exploring strategic alternatives for its own aerospace structures business.

The Bombardier disposal is being closely watched by Airbus. Guillaume Faury, Airbus chief executive, said in May the company was looking at the impact on its operations but declined to comment further. According to analysts, the company could acquire the operations itself, move production of the A220 wings to another site in the UK or allow a third party to take over operations.

Bombardier said last week that the Northern Ireland business had returned to an operating profit of $4.9 million in 2018, recovering from a $33.8 million loss in 2017. However, a series of exceptional costs still resulted in a pre-tax loss of $41.5 million for 2018.

Bank of America Merrill Lynch and Credit Suisse are advising Bombardier on the disposal. – Copyright The Financial Times Limited 2019.