If airport realises its potential as Europe-US hub, it will be less reliant on domestic market 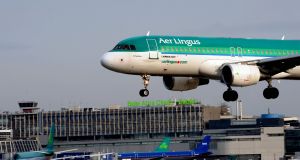 One of the reasons that International Consolidated Airlines Group paid €1.4 billion for Aer Lingus last year was that it wants to extend its reach across the Atlantic. Photograph: Aidan Crawley

It is getting close to the crunch for Dublin Airport Authority’s (DAA) €250 million new runway plan. The State company got planning permission for the project in 2007.

However, that runs out in August 2017, so the DAA must either ask the local planning authority, Fingal County Council, for an extension or go ahead and do enough work on the project to satisfy the council that it has been substantially completed so it can retain the permission.

If it fails on either count, it will have to re-apply for planning. The DAA would also have to submit a fresh application if it were to decide to build a runway longer than the 3,110 metres for which it now has permission.

Any new application could take a while. The council and planning appeals board took four years, from 2003 to 2007, to give the go-ahead for the project as it stands. This time, it would benefit from new laws that direct applications for important infrastructure projects straight to An Bord Pleanála, but that would require an oral hearing and could still take time.

It also faces another constraint: in order to build the runway, Dublin Airport must ensure that there are no more than 65 flights in and out of the airport between the hours of 11pm and 7am every night. Less than a year after it got planning permission, there were 72 flights operating between those hours. The DAA confirmed this week that the figure is now closer to 99.

In 2008 the company asked An Bord Pleanála to alter this condition under the Strategic Infrastructure Act. It did not pursue the application as passenger numbers fell sharply as the recession hit demand. However, given the increase in traffic since then, that condition will have to be changed.

At this stage, the DAA will not comment on the planning process, but given that it both needs and wants a new runway, it has a number of critical decisions to make on this front.

An increase in passengers is behind this. Last year the number of people who travelled through the airport increased by 3.3 million to 25 million. This was the first time that traffic at Dublin airport hit that number, while the scale of the increase was a record in itself.

A number of factors combined to fuel this growth. One was the increase in tourists to 8.6 million, which was another record. That was partly down to the improved economies in key markets such as the US and Britain, and a favourable exchange rate.

Spurred by the axing of travel tax and a cut in airport charges, Dublin Airport’s airline customers launched 22 new routes in 2015 and increased the number of seats and flights on 39 existing services.

There is another dynamic at play. Dublin Airport is beginning to establish itself as a hub for travel between the rest of Europe and North America. Midway through last year, it overtook the likes of Rome and Madrid to become Europe’s fifth biggest transatlantic airport, with 41,682 seats a week on these routes.

A growing element of that business is transfer passengers. Last year, one million of the 2.5 million people who flew from Dublin to North America actually began their journeys in Britain or Europe, changing to their transatlantic flights at the Irish airport. Its spokeswoman points out that it has more connections with British cities than Heathrow.

That business looks set to become increasingly important to Dublin Airport, but not just on the basis of recent trends. One of the reasons that International Consolidated Airlines Group (IAG) paid €1.4 billion for Aer Lingus last year was that it wants to use the Irish carrier, and by extension the airport, to extend its reach across the Atlantic.

Heathrow, Europe’s biggest hub, is near capacity. IAG chief executive Willie Walsh believes that the London airport will wait a decade at least before getting a new runway. He saw Dublin as a natural alternative and Aer Lingus, which had its own ambitions for its transatlantic business, as a natural fit with the group.

IAG’s pockets are deep enough to fund Aer Lingus’s ambitions. It threw its weight behind the Irish carrier by backing the launch of the three new US services, from Dublin to Los Angeles, New Jersey and Connecticut, this year. Aer Lingus can also tap into the larger group’s network for increased transatlantic custom.

An added attraction is that passengers can get US customs and immigration clearance at Dublin, something they cannot get in any airport outside the Republic (Shannon has it also). It is possible that the US will introduce pre-clearance into European airports, but that seems to be some time away; it has been claimed that the logistics of introducing it to bigger hubs such as Heathrow are difficult.

However, the airport’s own capacity is limited and it is likely to begin feeling the pressure very soon. Last year’s record already looks poised to fall. According to the DAA’s spokeswoman, passenger growth so far this year has again hit double-digit figures.

While it represented a new high, the 25-million benchmark is significant for another reason as well: it is the point at which the Commission for Aviation Regulation says that the DAA may increase passenger charges to help foot the €250 million bill for the new runway.

If the airport decides to go ahead with the project, the regulator will allow it to add almost 60 cent to the €9.87 that it can charge airlines for each passenger so it can fund the project. Such a move would anger key customers such as Aer Lingus and Ryanair. At this stage, they say that they do not want to pay for over-runs or share the commercial risk with the airport company. However, both airlines agree a new runway is needed, support that the DAA no doubt welcomes as it prepares to convince other stakeholders as well.