Ryanair and union may return to mediation following court clash 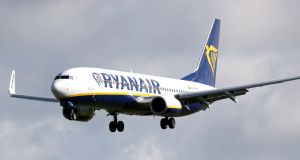 Ryanair and the Irish Airline Pilots’ Association (Ialpa) could return to mediation in a pay dispute that saw the pair clash in court this week.

The news came as Ryanair said that flights to and from UK airports operated with 97 per cent punctuality on Thursday despite a strike by members of the British Airline Pilots’ Association (Balpa) directly employed by the airline.

This week the High Court ordered members of Ialpa – part of trade union Fórsa – in Ryanair not to strike on Thursday and Friday this week, August 22nd and 23rd, in a dispute over pay.

Irish-based pilots were preparing to down tools after talks aimed at averting the strike collapsed last week, but Ryanair sought an injunction to halt the industrial action.

While Mr Justice Denis McDonald adjourned the matter to next month, it may be open to the parties to re-enter negotiations ahead of any court date.

Mediator Kieran Mulvey, who has chaired talks between Ryanair and Ialpa since a series of pilot strikes last year, is understood to have suggested to both sides that they return to the process early next month.

Ryanair has said that it is willing to re-enter mediation. Fórsa-Ialpa issued a statement saying that it would study Justice McDonald’s ruling before deciding on its next step.

However, the union says that Ryanair failed to respond meaningfully to its claims, prompting its ballot for industrial action.

Ryanair unions in the Republic, UK and Iberia had been planning strikes over various grievances that began with a five-day cabin crew walkout in Portugal on Wednesday and continued with a 48-hour strike by some UK pilots on Thursday.

While more widespread strikes over pay and conditions a year ago forced Ryanair to cancel hundreds of flights, the airline has forecast minimal disruption this time and ran a full schedule without major delays in the first day of action in Portugal.

A London court rejected an application from Ryanair seeking to halt Balpa’s 48-hour strike. British pilots plan a second strike from the early hours of September 2nd until just before midnight on September 4th.

Pilots, whose argument is with the company and not passengers, are showing their resolve

Ryanair has said that the group of Balpa members involved represents less than 30 per cent of those operating its aircraft in the UK.

In a statement, Balpa said the strike was causing “huge cost” to Ryanair.

“Pilots, whose argument is with the company and not passengers, are showing their resolve with the action after Ryanair declined time and again to negotiate on issues within the company which arise from years of non-recognition of unions,” the union said.

Unions representing cabin crew in Spain said plans for 10 days of strikes next month still stood after a round of mediated talks with the airline ended without agreement.