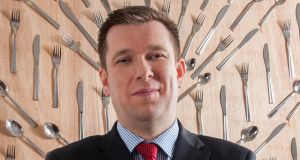 Adrian Cummins: he says a restaurateur should be allowed to write off a portion of the cost of providing accommodation for staff against tax

The Restaurants Association of Ireland (RAI) has accused the Government of not doing enough to address the chronic skills shortage facing the hospitality sector.

Adrian Cummins, the association’s chief executive, has called for the setting up of a multi-agency forum to address the skills issue across all sectors, and a reduction in visa waiting times for non-EU workers.

Speaking ahead of association’s annual conference in Killarney on Monday, he also urged the State to extend the payment of €5,000 bursaries to the hiring of female apprentice chefs, and tax incentives for restaurateurs in rent “pressure zones” who provide accommodation for staff.

“There is a skills shortage across many sectors, not just hospitality,” said Mr Cummins. The hospitality trade in particular has complained for several years of a shortage of thousands of qualified chefs.

Mr Cummins said the system for allocating work permits for non-EU staff needed reform, and that waiting times for visas needed to be cut from the current 11 weeks to four weeks “maximum”.

He also suggested that the quota of visas for non-EU skilled staff, such as ethnic cuisine chefs, should be linked by a formula to the falling unemployment rate. The quota, currently set at about 620 chefs across the restaurant sector, should automatically rise as unemployment falls, said Mr Cummins.

“Back in the 1990s Ministers used to support recruitment campaigns abroad to find skilled staff in places like South Africa and Malaysia. We need to adopt that approach again.”

He suggested that a national skills summit or forum could draw together representatives from government departments as well as industry groups, and meet “a couple of times per year and set targets to be met”.

The restaurant industry boss said the Government promised three years ago to pay €5,000 bursaries for the recruitment of young women as apprentices in skilled trades across a range of sectors. Mr Cummins complained, however, that officials have said restaurateurs that employ female apprentice chefs are not entitled to the payments, which would cover much of the cost of sending apprentices to college courses.

“The promise was made three years ago, but it now seems to have gone up in smoke. We have raised this issue with the Department of Education.”

The RAI is also set to lobby the State to introduce tax incentives for restaurateurs who provide accommodation for staff, whether it is on the premises or by developing houses for them elsewhere.

Mr Cummins argues that a restaurateur should be allowed to write off a portion of the cost of providing that accommodation against tax.

The RAI’s annual conference is also likely to hear calls for the resetting of tourism VAT rates at 11 per cent, and the wholesale redesign of the system of allocating liquor licences, which clogs up District Courts nationwide every September when renewal times rolls around.

“There is no reason whatsoever why that system can’t be set up online, saving on bureaucracy and the legal costs a restaurateur needlessly incurs going to court,” said Mr Cummins.