First Drive: VW T-Cross is a crossover with bags of appeal in a crowded marketplace 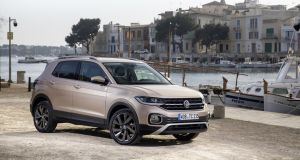 The T-Cross one-litre petrol unit develops either 95hp or 115hp.

You can spot the entry level version of Volkswagen’s new T-Cross by its “Dublin” steel wheels. In a world of sparkling alloys, our nation’s capital has been assigned to a set of 16-inch bog standard steel wheels. When the marketing gurus at the German car giant came up with the Madmen brainwave of christening its wheel options after cities, perhaps we were still in the depths of recession and deep in debt to our Teutonic allies.

Sitting on a set of shiny Bangalores, Volkswagen’s smallest SUV, the T-Cross, has finally reached the road. The chunky looking crossover is built on the same platform that underpins the VW Polo small hatchback.

The new Spanish-built five door looks tough and ready to tackle the urban jungle. Volkswagen is using the catch phrase “I am more” with the T-Cross and in many ways it is. The Polo is a smart hatchback, but the taller T-Cross delivers that bit more practicality.

It comes in front-wheel drive only and sits 138mm higher off the ground than the Polo. The T-Cross might look big and has some lovely exterior detailing like the sculpted bonnet, but it is an easy car to manoeuvre. A 10.6m turning circle means you can perform a U-turn where its rivals will have to fall back on the three-point turn.

It has a good elevated driving position and ease of access that’s a big draw for buyers in a very competitive market that also includes the Dacia Duster, Seat Arosa, Kia Stonic and Peugeot 2008 to name a few of its rivals, along with the slightly larger Renault Captur and Hyundai Kona.

Headroom is generous all round and the cabin is airy. Four adults fit comfortably and there are seatbelts for five people. The dash area is customisable and some options look particularly vibrant. Most materials used are impressive but others are hard wearing and remind you of its Polo origins. Interior ambient lighting and the availability of up to four USBs hint at the car’s quasi premium aspirations.

On the practical side small cars always are cosy in the back, but the rear high mounted seats in the T-Cross make it a surprisingly pleasant place to be on a trip. On the open road the rear suspension copes well and the back seat ride quality is never harsh. The taller rear seat offers a nice view to passengers – if they ever want to look up from their smart phones. The rear windows open fully too, unlike several rivals.

Open up the tailgate and you’ll find good access and a big boot that at 385 litres – expandable to 455 litres with the rear bench folded down – is five litres larger than in the VW Golf. The rear bench can also slide up to 140mm.

The T-Cross engine range for Ireland features two three cylinder TSI petrol engines fitted with particulate filters and one diesel engine. The one-litre petrol unit develops either 95hp or 115hp. A petrol 150hp DSG 1.5-litre will join the range at a later stage. Both have similar fuel consumption. The 95hp has a five-speed manual gearbox, while the 115hp gets a six speed manual or seven speed DSG automatic gearbox.

The 1.6 litre four-cylinder 95hp TDI diesel is offered starting from €25,295, but the sector is dominated by petrol and this version should only be considered by high mileage commuters. Overall when it comes to CO2 emissions the petrol engine range is honourably green, with emissions of 111g/km for the one-litre unit.

On the road the 95hp version has sufficient power to make good motorway progress. The five speed gearbox will do 120km/h at under 3,000rpm and generally feels eager. The 115hp is a little quicker and quieter and smoother on national routes with its six-speed gearbox or seven-speed DSG auto option. The ride quality is good and the few bumps we encountered – or sought out to test the suspension – were soaked up without fuss. The T-Cross is armed with a safe amount of standard fit ADAS safety systems: city emergency brake (AEB), front assist, pedestrian monitoring, lane assist, blind spot detection and rear traffic alert should reduce collisions. A driver alert system, adaptive cruise control and park assist are optional.

The baby VW T-Cross goes on sale in April and having missed the volume selling first three months of the year, 500 sales are expected in Ireland during 2019. In a full year sales of 1,200 are expected.

If you think crossovers are just a fad, Volkswagen has news for you. Between 2016 and 2020 a dozen crossovers and SUVs will have been launched by the brand. Next year will also be marked by the first fully electric Volkswagen crossover, called the ID Crozz.

The VW T-Cross is a welcome and well thought out addition to the range for now. Pity about the steel wheels.

Verdict: Cute, easy to use, and nice to drive