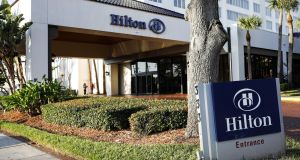 The hotel industry in the US has thrived against the backdrop of a robust economy, allowing corporations to raise their travel budgets which helped hotel occupancy rates hit a record high last year.

Though both Hilton and larger rival Marriott International have pointed to a deceleration in revenue growth per room in 2019, investors are closely monitoring the progress of trade talks between the US and China. The trade issues, if resolved, could have a positive impact on business travel.

Hilton cut its 2019 outlook for growth in RevPAR – a key performance metric for the hotel industry – to a range of 1 per cent to 3 per cent, from an earlier forecast of an increase between 2 per cent and 4 per cent.

On an adjusted basis, Hilton earned 79 cents per share in the quarter, beating analysts’ estimates of 69 cents, according to IBES data from Refinitiv.