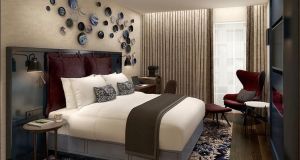 A deluxe room inside Dalata Hotel Group’s new Clayton Hotel in the City of London.

Irish hotel group Dalata has added to its British footprint with the official opening of a new Clayton Hotel in the City of London.

The four-star, 212-bedroom Clayton is the eighth hotel under that brand to open in the UK and the third in London, joining Claytons in the Chiswick and Cricklewood areas.

The hotel was bought for £91 million (€100 million) and is the first of several Clayton hotel openings planned for the UK under a multi-million euro investment throughout the Clayton network.

It is located near Aldgate East underground station in the city’s financial district, in close proximity to the new Liverpool Street and Whitechapel crossrail stations.

The other Clayton hotels in the UK are based in Cardiff, Leeds, Birmingham, Belfast and Manchester Airport, while Dalata also has three Maldron hotels in Newcastle, Belfast city centre and Belfast International Airport.

Dalata, which is a listed company on the Dublin and London stock markets, has a portfolio of 30 owned hotels, 10 leased hotels and three management contracts with a total of 8,834 bedrooms.

The group, which employs almost 5,000 people, is currently developing nine new hotels with a total of 2,333 bedrooms, which it plans to open over the next three years, taking the number of bedrooms with the group above 11,000.

It was founded in 2007 by its chief executive, Pat McCann.