Travel group has had two profit warnings in quick succession 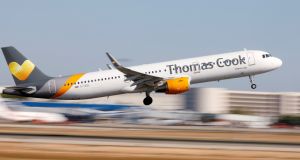 Travel group Thomas Cook said on Thursday it was willing to sell its airline business to raise cash and help it recover from a rough 2018 and weaker demand in 2019.

The company said it was launching a strategic review as it needed more resources and financial flexibility after two profit warnings in quick succession late last year.

“We are at an early stage in this review process which will consider all options to enhance value to shareholders and intensify our strategic focus,” chief executive Peter Fankhauser said in a statement.

The oldest travel company in the world, Thomas Cook was hurt by a heatwave that gripped northern Europe last year and deterred holiday makers from booking lucrative last minute deals. That led the company to cut its profit forecast twice in two months in the second half of last year.

Thomas Cook said it had made progress in managing its cost base but that bookings for this summer reflected consumer uncertainty, especially in Britain. In the first-quarter trading update, it said it would not change its outlook for the full year.

The group airline consists of Germany’s Condor, and UK, Scandinavian and Spanish divisions. In all, it operates 103 aircraft and posted a 37 per cent rise in operating profit last year to £129 million. – Reuters