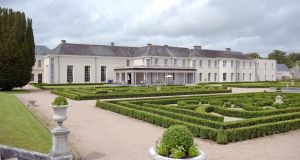 Revenue at Castlemartyr hotel in the 12 months to the end of March last year increased by 7 per cent from €9.5 million to €10.1 million. Photograph: Michael Mac Sweeney/Provision

The directors of the five-star Castlemartyr hotel in Co Cork believe the hotel will become profitable in the coming years after sustaining losses of €564,728 last year.

In accounts filed by Castlemartyr Country Hotel Resort Ltd the directors state the loss to the end of March last “is in line with expectations due to the nature of any start-up business of this scale”.

The company commenced operations in September 2015 and revenues in the 12 months to the end of March last year increased by 7 per cent from €9.5 million to €10.1 million. The directors state they plan a number of changes including refurbishment and development work in the hotel in order to increase sales.

Developed by the Supple family, Castlemartyr opened in 2008, and guests have included former US president Bill Clinton, Bruce Springsteen and celebrity couple Kanye West and Kim Kardashian, who stayed there on the Irish leg of their honeymoon.

A breakdown of revenues show that accommodation sales totalled €3.5 million, food sales amounted to €2.8 million and beverage sales of €1.4 million.