Norwegian losses topped €2bn in 2020 due to pandemic 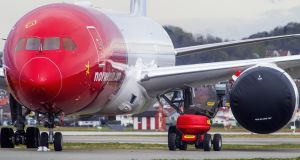 The Scandinavian airline is under Irish High Court protection from its creditors while examiner Kieran Wallace of accountants KPMG works on a rescue plan for the business.

Norwegian plans to raise up to €490 million as part of a restructuring that will see it axe long-haul flying to focus on Nordic countries and the rest of Europe.

This will involve cutting its fleet to about 50 jets from an original 140. The airline this week cancelled an order for 88 planes from European manufacturer Airbus.

All its aircraft were leased by Irish-based subsidiaries, which is why it chose the Irish High Court for its restructuring bid.

The near-total grounding of flights as European and North American governments responded to Covid-19’s first wave last spring forced Norwegian to seek support from creditors and its home country’s government in May.

Norway’s government refused to provide further aid in the autumn, prompting the airline to go into examinership in the Republic.

Under this system, the courts provide protection from creditors while the examiner works on a rescue plan for the business involved.

The High Court last week extended Mr Wallace’s examinership at Norwegian and its subsidiaries to April 16th. It had been due to end on Thursday.

Jacob Schram, Norwegian chief executive, said: “2020 was an exceptionally difficult year for the aviation industry and for Norwegian.”

The airline was in court this week seeking to repudiate contracts with various creditors.

On Friday, Brian Kennedy, the group’s senior counsel, noted that there were no longer any aircraft leases in dispute. However, the court has to deal with several guarantees tied to such agreements.

Repudiation involves ending these contracts with settlements covering both the period of the examinership and payments due before Mr Wallace’s appointment in November.

Creditors who have their agreements terminated in this way will receive the same dividend as that agreed by the examiner with all other claimants, on any outstanding debt due under those deals. The hearing resumes on Tuesday, March 2nd.