Troubled carrier due in High Court on Thursday 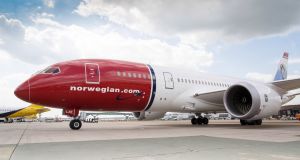 Norwegian hopes to emerge from the Irish examinership in April, after which it could initially fly up to 53 aircraft, depending on how Covid-19 travel restrictions hit bookings. Photograph: PA

Norwegian Air Shuttle (NAS) told creditors it plans to cut its fleet by more than half as it prepares for a crucial Irish court date on Thursday.

The troubled Scandinavian carrier has Irish High Court protection from creditors while examiner Kieran Wallace puts together a rescue plan for the business.

NAS told creditors at a meeting in Oslo, Norway that, assuming a successful rescue, it plans to have 40 aircraft operating in the Nordic region of Europe and 28 flying around the rest of the continent from next year.

They will leave it with just 68 short-haul jets from a total fleet of 140 aircraft when it went into examinership in November.

Norwegian hopes to emerge from the Irish examinership in April, after which it could initially fly up to 53 aircraft, depending on how Covid-19 travel restrictions hit bookings.

The airline will ask the Irish High Court on Thursday to allow it to “repudiate” or exit leases over up to 48 jets held by subsidiaries based in the Republic that are part of the examinership.

This process normally involves the company ending lease agreements covering any assets, but paying the lessor one settlement based on the amount owed on the date the company went into examinership; and, a second settlement covering liabilities from the period of the examinership itself.

The lessor then gets the same dividend as all other creditors on the difference between the total the company paid in the settlements and the full amount due.

NAS’s Irish subsidiaries, Arctic Aviation Assets, Drammensfjorden Leasing, and Lysakerfjorden Leasing, are leasing 48 aircraft. It is not known if the airline group’s lawyers will seek to exit all of those leases on Thursday.

A fourth company, Torskefjorden Leasing, which was part of the examinership, is now in liquidation. It was leasing more than 24 jets which are being returned to suppliers.

Irish subsidiaries that are not part of the examinership or under court protection hold the remaining 68 planes from Norwegian’s fleet.

NAS, Dublin-based Norwegian Air International, and the leasing companies, all sought Irish High Court protection to allow a restructuring as the companies registered in the Republic hold the airline’s main assets, its aircraft.

Wednesday’s creditors’ meeting was part of a simultaneous process in Norway’s courts, which is tied to the Irish examinership but subsidiary to it.

Creditors heard that the airline hopes to raise about €400 million in new investment and will focus on what were historically its most profitable routes when it restarts operations.

Norwegian will also cut an unspecified number of jobs; it had 10,000 workers in 2019, before Covid-19 restrictions devastated aviation.

The airline will also reduce the number of airports at which it has bases to streamline operations further.

The court will have to approve any scheme to rescue Norwegian put forward by Mr Wallace.

The scheme or arrangement, as it is formally known, will first have to get the backing of at least one class creditors whose rights it affects.