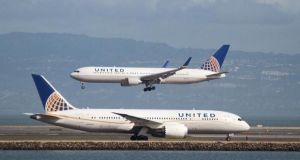 United Airlines has operated its direct Belfast-Newark service since 2005.

Northern Ireland’s only direct, scheduled daily air service to the US will end on Monday as United Airlines grounds the flight because of its “poor financial performance”.

The service, operated by UA from Belfast International Airport to Newark, New Jersey since 2005, has, according to the airport, been well supported and carried more one million passengers.

Airport management have blamed the European Commission for “killing off” the service after it launched an investigation into a multimillion-pound financial support package, estimated to be worth more than £9 million, that was agreed last summer by the North’s Executive to safeguard the route.

Under EU state rules, public authorities are not allowed to grant a specific airline an “undue advantage”.

Local business and tourism chiefs have warned that the absence of a direct US service from Northern Ireland could put it at a disadvantage and leave tourists, businesses and potential investors with no other option on the island but to travel to Dublin to access US flight services.

Belfast airport’s managing director, Graham Keddie, is confident that 2017 will prove to be “a bumper year for us” despite the UA decision.

“We continue to do all we can to fill that gap,” he said. “We are working closely with government to deliver a major long-haul project that would open up attractive additional and badly needed connections.”

Latest figures from the UK’s Civil Aviation Authority shows Belfast is the fifth busiest airport in the UK for domestic passenger traffic, behind Heathrow, Gatwick, Edinburgh and Glasgow.

Last year the airport grew by more than 17 per cent as more than 5.1 million passengers travelled through the facility. It is now on target to achieve a new record of 5.4 million in 2017, according to Mr Keddie.

“We could do much more with the right supports,” he said. “Air passenger duty is a considerable disadvantage not only to our airports, but to Northern Ireland as a region. If it disappeared, we could transform inbound tourism, leading to further significant investment along with the creation of thousands of jobs.

“Getting rid of this impediment is, in my view, a no-brainer,” he added.

1 Should my mam wait for house prices to drop before buying?
2 Cheers: Conor McGregor's whiskey races up the sales chart
3 Big majority uncomfortable returning to everyday activities
4 Why we’re about to learn if we are really in the A-team
5 Dublin drops out of top 50 in ranking of best cities for start-ups
6 ‘I’m so lucky to be in the Caribbean – a million miles from Derry Girls’
7 ‘I have a talent for justifying purchases’
8 Chris Johns: Past is another country when it comes to our post-pandemic future
9 US ‘hard seltzer’ drink White Claw launches in Ireland
10 McCanns’ Balmoral sees property value hit from Covid-19
Real news has value SUBSCRIBE