Motion to ask contractors to refrain from Clerys work 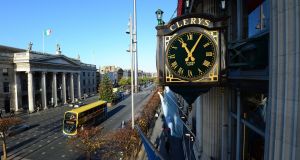 Clerys on O’Connell Street: shop closed last year with the loss of 467 jobs. Its owner, OCS Properties, is seeking permission from Dublin City Council to redevelop it as a hotel, offices, shops and a restaurant. Photograph: Dara Mac Dónaill

Dublin city councillors will vote on Monday on a motion calling on contractors to refuse to work on the redevelopment of Clerys in protest at the treatment of the department store’s former workers.

Clerys closed controversially last year with the loss of 467 jobs. Its owner, OCS Properties, is seeking permission from Dublin City Council to redevelop it as a hotel, offices, shops and a restaurant.

Independents representatives Nial Ring and Christy Burke have tabled an emergency motion to Monday night’s Dublin City Council meeting calling on “any and all contractors” approached to work on the Clerys project to refuse unless former Clerys workers are “compensated properly for their services or guaranteed a job in the new development”.

The motion calls on other builders to follow specialist contractor Lambstongue, which decided not to work on the redevelopment of the building after it was approached unless Natrium, which owns OCS Properties, met workers who lost their jobs when the store closed.

OCS said on Sunday that Lambstongue was one of a number of parties asked by its design team to provide information for consideration but was never appointed to the project.

The company maintains that the redevelopment will create 1,073 jobs building jobs and give work to “many” from Dublin’s inner city. Once it reopens, 1,450 people will work there, while it will also be responsible for another 1,115 indirect jobs and contribute €329 million to the economy.

A report by DKM economic consultants notes the redeveloped building should employ 330 people in retail and could benefit some of the staff who previously worked in Clerys.

It sold the operating company for a nominal sum to an insolvency specialist which successfully petitioned the High Court to have it liquidated. As a result, 130 Clerys employees and about 330 people working for concession holders, lost their jobs in the store. OCS says that a num ber of concession staff were redeployed.

The State had to pay the €2 million in statutory redundancy due to the 130 Clerys staff. The transaction sparked a wave of protests and the formation of a group, supported by trade union Siptu, Justice for Clerys Workers. Its spokeswoman, Maureen Deans, is one of more than 40 individuals to have raised concerns at the planning application.

Dublin Chamber’s spokesman, Graeme McQuinn, said the redevelopment could potentially provide a catalyst for the rejuvenation of O’Connell Street and boost jobs on the city’s north side.

9 Insurance broker Lockton to create up to 50 new jobs