740 bikes to be made available under scheme in Cork, Limerick and Galway 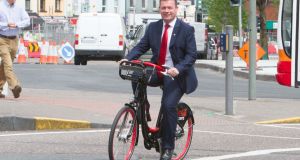 Minister of State at the Department of Transport Alan Kelly pictured on one of the new public bikes.

The €3 million roll out of public bike schemes in regional cities of Cork, Limerick and Galway will be such a success that the local authorities in each city will soon be seeking to expand the schemes, Minister for Public Transport Alan Kelly has predicted

A total of 740 bikes are being provided in the scheme, with the first bikes due to be in situ and operational in each city by the end of September.

Mr Kelly said the Regional Cities Public Bike Scheme, which is sponsored by Coca Cola, is similar to one which has been operational in Dublin since 2009 and which has proven the most successful public bike scheme per capita anywhere in the world.

“There was an awful lot of cynicism about the introduction of the scheme in Dublin - people were predicting that bikes would be vandalised and would end up in the River Liffey but less than a handful of bikes have been damaged or lost since it was introduced,”he said.