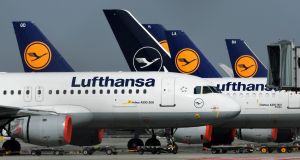 (FILES) In this file photo taken on March 27, 2020 airplanes of German airline Lufthansa are parked at the "Franz-Josef-Strauss" airport in Munich, southern Germany, amid novel coronavirus COVID-19 pandemic. - Lufthansa says on May 7, 2020 in talks for German govt to take 25% stake in 9 bn-euro rescue (Photo by Christof STACHE / AFP) (Photo by CHRISTOF STACHE/AFP via Getty Images)

Lufthansa’s management said the need for a multibillion-euro coronavirus bailout was becoming “urgent” as talks with the government in Berlin drag on.

In a letter to employees, the airline said cash reserves continued to shrink while it negotiates the €9 billion rescue package. Lufthansa’s board said it hoped the government would find the “political will” for a deal that would keep the carrier competitive against international airlines and meet with European Union approval.

“The question of when and in what structure the German government decides to support Lufthansa is becoming more and more urgent for us,” the company’s management board said in the letter seen by Bloomberg.

Lufthansa is running out of time and money, burning through €800 million each month after the coronavirus grounded most of its fleet. Chief executive Carsten Spohr said on May 5th that the company had about €4 billion in cash remaining.

The letter gave further details of Lufthansa’s expected fleet reductions for the coming years. The board said it expected 300 of its aircraft would remain grounded in 2021 as demand for flying recovers only slowly, with 200 remaining out of service into 2022.

Lufthansa had previously said it expected its pre-crisis fleet of around 760 aircraft to be around 100 smaller once normality returns around 2023, a forecast it stuck to in the letter. – Bloomberg