Ryanair not flying so high this year

Cantillon: Group expects to lose €200 million in the three months to the end of June 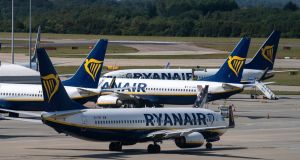 Ryanair earned a €1 billion profit in the 12 months to March 31st but Covid-19 has left the company facing the toughest challenge in its history. Photograph: Will Oliver/EPA

Ryanair’s results for the financial year ended March 31st 2020 give a good insight into how the cost of Covid-19 travel shutdowns are mounting for airlines.

The Irish group, now made up of four carriers, expects to lose €200 million in the three months to the end of June, the period for which it believes more than 90 per cent of its fleet will be grounded while pandemic restrictions remain in place.

Significantly, it expects to lose an as-yet unquantified sum in the following quarter, ending on September 30th. Analysts at Davy have pencilled in an €801 million loss for the year as a whole.

This is peak summer, the time of year when Ryanair and its rivals expect to fly millions of northern Europeans, including many Irish people, south for their holidays.

In short, it is the industry’s most profitable time of year, not a period when any significant player, particularly Ryanair, expects to lose money. Even while the Irish carrier has announced that it will begin flying 40 per cent of its schedule from July 1st, this depends on agreed precautions being taken in airports and on aircraft. That has still to be worked out.

Overall, the group now calculates it will fly 80 million people in the current financial year, against 154 million predicted before Covid-19 arrived. Not only that, it expects to sell many of those seats at bargain-basement prices as it believes it will have to compete with rivals likely to get €30 billion in government cash, allowing them to sell flights below cost.

Ryanair has also provided for a €353 million charge related to fuel hedges for this year. The airline is obviously burning less fuel as it is not flying, so there is a cost tied to not using hedges that it has put in place against the kerosene it expected to use.

So while Ryanair earned a €1 billion profit in the 12 months to March 31st, most analysts were drawn to the fact that the group had €3.8 billion in cash. This gives it one of the strongest balance sheets of any airline in Europe. Nevertheless, Covid-19 has left Ryanair facing the toughest challenge in its history.