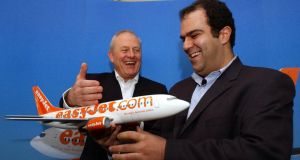 EasyJet founder Stelios Haji-Ioannou is offering £5 million (€5.7 million) for any information that leads to the cancellation of its order for 107 Airbus jets as he steps up his campaign to oust the budget airline’s management.

Haji-Ioannou, whose family owns a third of easyJet’s shares, has argued for a decade that the airline’s fleet expansion would destroy shareholder value and he has intensified his push for management changes since the coronavirus decimated air travel.

He has ordered a special shareholder vote on May 22nd to try to remove the airline’s chief executive, chairman and two other directors. He would need over 50 per cent of the votes to succeed and a number of big investors have said they will back management.

In a statement on Tuesday, Haji-Ioannou said he was looking for tips or information from easyJet insiders about any suspicious dealings with Airbus, such as lavish entertainment or unexplained wealth.

The European planemaker agreed in January to pay $4 billion in fines after reaching a plea bargain with prosecutors in Britain, France and United States over alleged bribery and corruption stretching back at least 15 years.

EasyJet issued a statement on Tuesday rejecting any suggestion it had acted improperly, as it did on April 27 after Haji-Ioannou called the shareholder vote.

“As we have previously stated, the board firmly rejects any insinuation that easyJet was involved in any impropriety. EasyJet has maintained the highest standards of governance and scrutiny in respect of its aircraft procurement processes,” it said.

EasyJet said it had hired an external auditor to review the fleet selection process that led to the £4.5 billion Airbus order in 2013 and the auditor’s report confirmed that robust procurement processes had been followed.

Haji-Ioannou said on Tuesday he would pay £10,000 for any tips that help his campaign, as well as the £5 million reward if they lead to the order being cancelled.

“If you are a current or past hard-working easyJet employee, or anyone else who has seen anything suspicious by anyone inside easyJet in their dealings with Airbus, you could get a reward from Stelios worth up to £5 million,” he said.

EasyJet has said it has sufficient liquidity for a prolonged grounding of its planes due to the coronavirus pandemic and that the Airbus contract is vital to its future as the new jets are needed to replace older aircraft.

Some shareholders agree. Three of the company’s bigger shareholders, who collectively own about 15 per cent of the stock, have said they will back the current management in the vote. EasyJet also said on Tuesday that investor advisory groups ISS, Glass Lewis and PIRC have recommended shareholders back management.

Haji-Ioannou said on Tuesday that easyJet’s Airbus order puts the future of the company at risk as it cannot afford to pay the planemaker when it is has no revenue and it won’t need the planes after the pandemic because air travel will slump.

Haji-Ioannou, who founded easyJet in 1995 but stepped down from its board in 2010 in protest over its expansion plans, also noted that the airline had not yet announced any job cuts.

Rivals such as Ryanair, British Airways and Wizz Air have all said they will need to make thousands of layoffs to weather the coronavirus crisis and cope with a smaller market afterwards. – Reuters