An extra 88,000 vehicles took to our roads last year, according to new figures 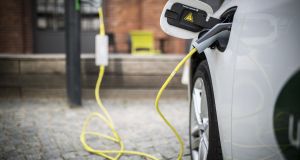 Just 9,170 vehicles in the national car fleet is fully electric, according to new figures from the Department of Transport.

Just 9,170 vehicles in the State's car fleet are fully electric, according to new figures from the Department of Transport.

Despite efforts by the Government to encourage a move to electric, and targets for one million electric vehicles on our roads by 2030, they made up just 0.3 per cent of the Republic’s vehicle fleet by the end of last year. Of these 8,473 were passenger cars.

There were an extra 88,117 vehicles on our roads last year, bringing the total national fleet to 2.8 million, according to the Department’s statistics.

According to the figures published in the Irish Bulletin of Vehicle and Driver Statistics for 2019, the total number of licensed (taxed) vehicles recorded on Irish roads on December 31st, 2019 was 2,805,839, up 3.24 per cent on the previous year. Aside from passenger cars, the fleet also comprised 366,760 goods vehicles, 75,863 agricultural tractors, 50,447 vintage vehicles and 42,492 motorcycles .

1 Passengers face queuing in car parks at Dublin Airport
2 Student accommodation sector set for harsh Covid-19 lesson
3 Major credit union plans to limit savings accounts to €40,000
4 Penneys will not reopen on Monday despite expected changes to lockdown rules
5 Backers agree new $60m investment in Limerick aviation lessor
6 Brother is dragging his heels as executor of uncle’s will - is there anything I can do?
7 Tesla’s Elon Musk calls for breakup of Amazon in tweet
8 Bad posture working from home easy to acquire
9 Press Up launches legal action against insurer RSA
10 Irish economy grows 1.2% in first quarter as exports offset Covid-19 impact
Real news has value SUBSCRIBE