Lauda to fly from Knock Airport from March 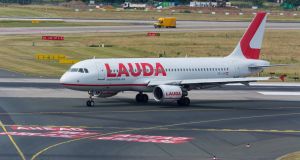 Founded in March 2018 by the late Formula One driver and businessman Niki Lauda, Lauda currently operates 23 aircraft from its Vienna headquarters, flying to more than 90 destinations. Photograph: iStock

Lauda, the Austrian-based airline owned by Ryanair, has launched its first ever service from regional Ireland with flights from Ireland West Airport Knock due to start next year.

From March 2020, Lauda will fly to Palma Majorca twice a week using an Airbus A320, capable of accommodating 174 passengers.

The flights with the low-cost carrier will operate every Tuesday and Friday from March 31st throughout the summer period.

Founded in March 2018 by the late Formula One driver and businessman Niki Lauda, Lauda currently operates 23 aircraft from its Vienna headquarters, flying to more than 90 destinations. In its 2020 financial year the airline, which is 100 per cent owned by Ryanair Holdings, expects to carry more than 6.5 million passengers.

“Today represents another major milestone in the airports history as we welcome a new major airline partner to the airport,” said Arthur French, chairman of Ireland West Airport.

“We are delighted that Lauda have given the airport and the west and north west of Ireland a huge vote of confidence by launching their first ever service from regional Ireland with a new scheduled service to Palma-Majorca in Spain, which we know will be hugely popular with holiday makers in the region.”

Speaking at the launch of the new service, Andreas Gruber, Lauda chief executive, said this coupled with other new routes will see the company’s fleet expand to 33 aircraft by summer 2020 with ticket prices starting from €19.99.

Ireland West expects to see record passenger numbers this year with more than 800,000 people due to travel through the airport. The addition of the Lauda route to next summer’s schedule will increase the number of destinations offered from the airport to 24.

1 Will family’s tax debt stop me getting my inheritance?
2 What is Covid Tracker Ireland?
3 British holiday home rental company exits Irish market
4 Why gift a son now if it eats into his tax-free inheritance threshold?
5 How to save money while helping to save the planet
6 UK holiday group quits Ireland, ESRI on child poverty, and SME stimulus
7 Mortgage arrears: Prevention is definitely better than cure
8 Can we finally say farewell to the scourge of hot-desking?
9 Big Four told to outline plans for audit split in UK by October
10 Pension funds play loser’s game in alternative assets
Real news has value SUBSCRIBE