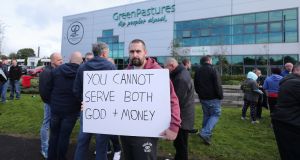 The Ballymena bus manufacturer that went into administration last week with the loss of 1,200 jobs has received £9.05 million (€10.2 million) of government money since 2002, the North’s regional business development agency has confirmed.

According to Invest NI, the Wrights Group also had a “loan of £2.5 million” in place.

The government agency has indicated that it will consider “pursuing clawback” of some of the financial assistance provided to the group following its collapse.

In 2014 the Wrights Group was offered £1.8 million of grants from Invest NI towards the cost of a £14 million research and development initiative.

At the time the North’s minister for enterprise, Arlene Foster, said the group was one of Northern Ireland’s “most successful indigenous manufacturing companies, and this is in large part due to its continuous focus on innovation”.

Details of the level of government funding for the Ballymena bus company come as scrutiny intensifies around the parent company’s past charitable donations.

The Cornerstone Group is a privately owned organisation controlled by members of the Wright family, including the group’s original founder, 92-year-old William Wright, his daughters Amanda Knowles and Lorraine Rock, and his son Jeffrey (Jeff) Wright, who is listed as the majority shareholder.

Annual accounts for the Cornerstone Group show that from 2010 to 2017 it made charitable donations amounting to £15.38 million to fund the group’s “commitment to Christian, evangelical and other charitable activities”.

As well as being the majority shareholder in the Cornerstone Group, Jeff Wright is also a director and pastor in Green Pastures: The People’s Church in Ballymena, Co Antrim.

Green Pastures is a charity limited by guarantee without share capital.

According to its latest set of accounts, it received donations for the 12 months ending April 2018 totalling more than £4.2 million.

On Sunday, up to 500 former Wrights Group workers protested outside Green Pastures church to highlight their anger over the charitable donations made by the Cornerstone Group.

According to the consolidated statement of financial activities contained in Green Pastures church’s latest set of published accounts, the charity had a total income in the 12 months ending April 2018 of more than £7.7 million.

The accounts also highlight that Green Pastures church has a subsidiary, Advance Engineering Group Limited, which is a private company also incorporated in Northern Ireland and that also lists Jeff Wright as a director.

According to the directors’ report contained in the Green Pastures church annual statements for the year ended April 2018, the trading activities of the subsidiaries provide “finance to further the aims and objectives of the church and its associated charities, Connect Ministries and Compassion Ministries”.

Advance Engineering Group was a major supplier to Wrightbus, and on its website states that its Advance Assembly division had “allowed the Wrights Group to increase their production by five buses per week”.

It also lists examples of products that it supplies to customers as single- and double-deck bus rear frames, seat-box assemblies and high-volume corner assemblies.

In the Green Pastures church annual statements for the year ended April 2018, it states that during the year its “trading activities” reported an “increase in turnover of £400,000 to more than £3.4 million for the year.

Profitability of the trading activities before donations and taxation “totalled £234,534”, it also stated.

Last Friday the Green Pastures church issued a statement in which it said it was “devastated by the huge number of job losses at the Wright Group”.

It also said in the statement: “We understand the hurt, anger and confusion felt by so many, as many within our own congregation have been personally affected by these job losses and we are doing all we can to support them at this time.

“As with any donation we receive as a church, we are incredibly grateful for the support the Wright family have offered us. They, along with many others, chose to be generous when their family business enabled them to do so.”