Wrightbus goes into administration with loss of 1,200 jobs 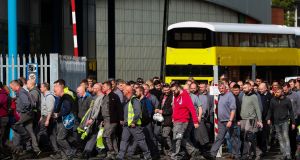 Workers walk through the gates of the Wrightbus plant in Ballymena on Wednesday. Photograph: Liam McBurney/PA Wire

Some 1,200 staff at Ballymena bus builder Wrights Group have lost their jobs after the company went into administration. One of the North’s largest manufacturers, Wrights Group had been in business for 73 years. Most recently, it has been best known for building London’s red Routemaster double-decker buses, known as the Boris bus.

The Wright family that controlled the company said in a statement that they were “devastated that the company has been placed in administration by the board”. They had been covering “significant losses” at the business for more than a year, and it was impossible to maintain this, they said.

The family pointed to changes in bus technology from diesel to electric, which have led to slowing orders from within the UK.

“As a shortfall became apparent, one of the steps taken was to move work from our Malaysia facility back to Ballymena to secure jobs here,” the family said, adding that they were confident that the business could still attract a buyer.

“Since it was established in 1946 in a tin shed, Wrightbus has become a world leader in bus manufacture and technology, employing tens of thousands of people. The company has built a culture and tradition of expertise and innovation in the Ballymena area which is recognised across the globe. The production of the world-famous London Routemaster is just one example of the many achievements of the firm and we are hopeful that a new buyer will be found and that work at the factory can continue.”

Wrights Group had been seeking an investor or buyer since July when it first emerged that the business was in financial difficulties and had called in Deloitte.

The administrators said on Wednesday that since no buyer had emerged for the company that “approximately 1,200 redundancies” had to be made.

Mr Magnay, one of the joint administrators, said: “It is bitterly disappointing for all concerned that despite extensive efforts over recent months it has not been possible to find a buyer who wanted to maintain the business as a going concern.

“We recognise the companies are crucially important employers in Ballymena, and this will be devastating news for those who worked there, their families and the town, which has already suffered from a number of manufacturing closures in recent years. We will continue to support employees through this difficult time.”

He said the joint administrators would continue to “explore all remaining options for the business and assets, and would encourage any parties with an interest to contact them”.

But Jackie Pollock, Unite’s regional secretary, has appealed to the British prime minister Boris Johnson to directly intervene to “save jobs and skills” in the North.

Mr Johnson has on a number of occasions in the past publicly voiced his strong support for the Co Antrim manufacturer.

When he was mayor of London Mr Johnson ordered more than 1,195 Routemasters from the Ballymena company.

During a visit to the Wrightbus factory, he described the buses as “a masterpiece of British engineering and design”.

More recently in the House of Commons, Mr Johnson said his government would do “everything we can to ensure the future of that great UK company”.

“We’re putting it to him again – do everything in your power, invest into Wrightbus and get them over this short-term blip,” he said.

The Ballymena group had been one of the North’s leading exporters, selling buses to Dublin, London, Las Vegas, Hong Kong and, more recently, Latin America.

The company’s demise will have a serious impact across the North’s economy, not just in Ballymena, which has lost more than 1,600 jobs in the last five years with the closure of the tobacco company JTI Gallagher and French tyre manufacturer Michelin.

Three years ago when the Wright Group celebrated its 70th anniversary the company reported a turnover of £276 million (€311 million).

But its most recent set of published accounts show losses of £1.7 million for 2017.

In recent years the company had seen a decline from one of its strongest customer bases: UK-based private and state-owned public transport operators, many of whom have parent companies in continental Europe.