Killarney councillors round on buskers who ‘can’t sing’

Some buskers are ‘lowering the tone’ and using foul language to tourists, meeting told 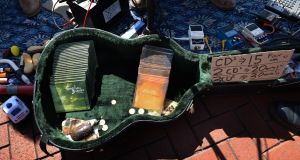 ‘Busking is welcome but there has to be consideration for staff in shops,’ director of services John Breen said. File image: Brenda Fitzsimons

Gardaí in Killarney are to investigate the behaviour of some street “entertainers” after councillors complained that the public was being insulted and foul language was being used to tourists on the streets of the town.

The move to regulate buskers and all street entertainers in Co Kerry is underway but is long overdue, a meeting has been told.

A permit system will be on the agenda, and some form of audition looks likely in the laws to be introduced before next St Patrick’s Day.

There have been complaints about buskers “lowering the tone” in Killarney since 2012, and last year town mayor Cllr Niall Kelleher proposed a permit system limiting performances to a certain number of hours and locations.

Those bylaws are now being drafted, a council meeting was told in Killarney on Wednesday morning after Cllr Kelleher complained the regulations had yet to be introduced.

“I’m a bit like a broken record myself here. I put this motion down 12 months ago and was told bylaws for buskers would be implemented for the tourist season this year,” he said.

While he was firmly in favour of busking and wanted a performance bandstand for local musicians and school groups “we have some people who think they can sing and they can’t”, the mayor said.

“Others who think they are entertaining use foul language, and this is unacceptable and I am delighted we have raised this with the gardaí this morning and they are going to look into it.”

The Killarney mayor was critical of Galway City Council, which he said brought in laws allowing amplification after 6 pm without a time limit.

“Hurtling insults and using foul language at tourists is degrading,” he said.

Other councillors testified to observing ill-behaviour among a small number of the town’s buskers.

Cllr John Joe Culloty said he had encountered “vulgarity” less than 100 metres from the chamber. He wanted a ban on all street amplification by buskers.

Cllr Michael Gleeson said it was national policy to encourage people to come back to live in town centres and such residents deserved peace and quiet.

“Some of them lower the tone of the place,” Cllr Gleeson said of the entertainment.

The tourism committee of Kerry County Council has been charged with bringing in the bylaws and designing a means of accrediting buskers based on their ability.

Director of Services John Breen said: “Busking is welcome but there has to be consideration for staff in shops. Most people are passing by, but the staff are stationary and have to listen to it all day long.”

“Killarney is about high standards and some of the things at present are unacceptable,” Mr Breen said.