‘It’s gone beyond a joke’: Hauliers struggle with insurance hikes 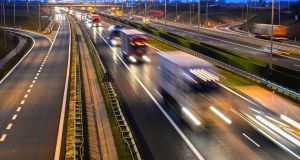 A number of Irish road hauliers have painted a worrying picture of the haulage industry after news emerged earlier this week that at least four insurance brokerages were raided by European officials on allegations of anti-competitive practices.

“We’re struggling to stay in business,” said Stephen Mullen, the owner of Sligo Haulage and Distribution. Mr Mullen employs more than 40 people, has 15 trucks and 15 vans on the road, and has worked in the industry for some 35 years.

Mr Mullen’s insurance more than doubled the last time he renewed, from €39,000 to €82,000. He believes that insurance is going to destroy the logistics industry.

In addition to insurance-related woes he sees red tape as another factor that chips away at his company’s bottom line. “There’s so much red tape. To be honest, I don’t want to be in business any more. It’s actually driving me to an early grave,” he said.

Verona Murphy, the president of the Irish Road Haulage Association and the owner of Verona Murphy Transport in Co Wexford, said the premium increases have become punishing.

“It’s gone beyond a joke,” she said. “My insurance went up 300 per cent with a full no claims bonus . . . in the last three months, I’ve never seen anything like it.”

Ms Murphy’s company employs eight people. She says those jobs are at risk: “If [insurance] doesn’t reduce or stay the same I’ll have to exit the market.”

Ms Murphy blames a lack of regulation for the current situation. “We’ve heard it all in relation to the banking sector. Do we have to go through it all again?”

The issue as Ms Murphy sees it is that insurance companies are deciding on a minimum price hauliers should pay and are not paying any attention to the mileage on vehicles, the age of trucks or even whether an operator has a no claims bonus. Essentially, they have no regard for a hauliers risk profile, she suggests.

In Virginia, Co Cavan, Ray Cole’s Virginia International Logistics has operated for more than 30 years. He has also experienced an increase in the price of insurance. “It’s a strain on the business. We had to put in measures like cameras in trucks, costing about €1,200. That has helped with the premium,” he said.

Mr Cole’s operation employs about 140 people and operates more than 100 trucks and other vehicles. While his insurance rose by about 60 per cent at the last renewal, he feels sorry for the smaller operators. “The small operator wouldn’t have the resources and they’ve been hit big time,” he said.

“There are people that have been closed for a number of months because they can’t afford the insurance.”

The problems in the Irish insurance industry have caused some operators to go as far as Bulgaria to get insured, Mr Cole said.

Joe Freer, the owner of Joseph Freer Transport in Navan, is exploring the possibility of getting insured in the UK.

His company employes 14 staff and he has 31 vehicles that require insurance between trucks and trailers. The outlook is not particularly positive. “You’re backed into a corner the whole time.”

John Duffy has been operating a freight business in Newtowncunningham, Co Donegal, since 1980. His company has 67 vehicles on the road and employs 88 people.

6 US offers pathway to profit CRH paved in last recession

10 Ryanair among airlines to demand reduction in airport landing fees