‘Ulysses’ vessel remains out of service for up to two more weeks, company said 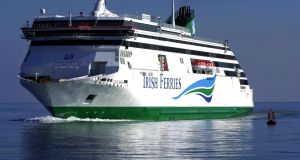 Irish Ferries-owner ICG has warned of further passenger disruption this summer as its Ulysses craft remains out of action for up to two more weeks on the back of technical difficulties.

The craft, which operates on the Dublin to Holyhead route, entered dry-dock in Belfast on June 28th. At that time, the investigation and repairs was due to be complete by July 4th.

However, in a stock exchange update on Monday, the company said it has been informed by service engineers that “the issue is more serious than originally anticipated” and the vessel will likely be out of service for a further one to two weeks.

“In advance of her return to service, we will adjust the schedules of our other vessels to minimise the disruption to our customers as much as possible.

“The Dublin/Holyhead route will operate with the Epsilon on the Ulysses schedule alongside the Dublin Swift, which will operate additional evening sailings.

“Irish Ferries would like to apologise to all our passenger and freight customers for this technical disruption. Despite our best efforts we can find no replacement tonnage in what is now the peak tourism season.”

ICG stressed that this is the first major disruption to the vessel since its deployment on the route in 2001.

The latest disruption comes after the company cancelled a series of bookings on its new WB Yeats ferry that was scheduled to begin travelling to France this summer.

The delivery of the €147 million vessel to Ireland had been delayed by German shipbuilder FSG which, in a statement, attributed the delay to receiving parts late from suppliers.

As a result of the delay, ICG rearranged or refunded 98 per cent of the 5,746 cancelled bookings that were due to travel to France. Of those, 15 per cent were cancelled and refunded, 2.5 per cent opted for land-bridge and the remaining 82.5 per cent were moved to alternate Irish Ferries sailings.

In a note to clients, Davy equity analyst Stephen Furlong said the Ulysses delay was likely to hit revenue by about €2 million a week.

“Summer 2018 is becoming an ‘annus horribilis’; combined with the delays in the WB Yeats, this has seen around €13 million taken off 2018 Ebitda [earnings before interest, taxes, depreciation and amortisation],” he said.