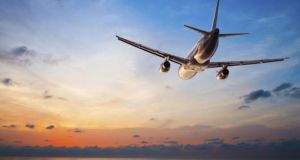 While concerned about Brexit, Mr Brennan said there will also be “opportunities to Ireland, such as increasing the attractiveness to transit through Ireland to North America rather than the UK”

Ireland’s aviation’s head Eamonn Brennan has warned of the threat Brexit poses to the sector.

Mr Brennan, chief executive of the Irish Aviation Authority (IAA), is concerned that a new Air Service Agreement will have to be reached between the EU and Britain after Brexit. He stressed the importance of air connectivity between the UK and Ireland for trade and tourism.

Mr Brennan also pointed out that up to 90 per cent of transatlantic flights pass through Irish air space. “The UK market accounts for over 60 per cent of the capacity from Shannon, Kerry and Knock and for over 40 per cent of all the passengers from Dublin. Indeed, if we look at the number of business trips we have via air travel across the whole of the EU, 44 per cent are with the UK. It really is a crucial enabler for the Irish economy,” he said.

“Once the UK leaves the EU a new Air Service Agreement will have to be put in place between the EU27 and the UK. If that agreement constrains the ability to fly easily between Ireland and the UK or for Irish airlines to operate freely around the EU, then that will be bad for the Irish economy in general,” Mr Brennan warned.

He said, “It looks like we are heading for a hard Brexit so it’s really vital that aviation is at the forefront of the negotiations from an Irish perspective. That’s very important as the rest of the EU might not share the same view as us.”

While concerned about Brexit, Mr Brennan said there will also be “opportunities to Ireland, such as increasing the attractiveness to transit through Ireland to North America rather than the UK and our airports will be seeking to capitalise on that but in broader terms a hard Brexit will be difficult for the Irish civil aviation industry”.