Ryanair looks to tie down deals to expand short-haul dominance

O’Leary says when Boeing and Airbus have low-cost, long-haul aircraft ‘we’ll jump on it’ 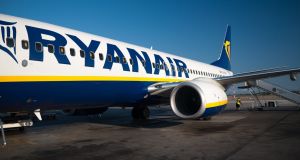 Ryanair is closing in on agreements that could see it take control of an even bigger swathe of European short-haul travel.

The Dublin-based company is seeking deals with carriers including Norwegian Air Shuttle, Aer Lingus, Alitalia and Deutsche Lufthansa under which its flights would help feed passengers onto their long-haul services.

Ryanair would be open to adding frequencies in order to provide sufficient connectivity, and could ultimately replace many short-haul services operated by network carriers, encouraging them to focus exclusively on intercontinental routes, chief executive Michael O’Leary said in an interview.

Mr O’Leary cites Aer Lingus’s short-haul business in Dublin to illustrate how the feeder plan would work.The carriers compete directly on 28 services, he said, and while Ryanair would not seek to take over “trunk routes” a deal would allow the IAG unit to forgo unprofitable peripheral operations while connecting to the 85 destinations offered by its discount rival, including Birmingham and Edinburgh.

The CEO said he has offered a similar arrangement to Alitalia on routes from Rome and Milan.

Baggage would be transferred automatically, though the agreements are likely to stop short of code-share terms in which airlines sell tickets on each other’s flights as if they were their own.

“There’s nothing but upside for the legacy carriers in this except you’ve got to persuade them it’s not some scam,” Mr O’Leary said in Brussels after a meeting of the A4E airline lobby group.

European airlines are grappling with shrinking margins after the low oil price prompted a capacity splurge that has sent ticket prices tumbling.

Ryanair said this week that its fares have slumped 16 per cent this winter, and are set to continue falling, making it even tougher for full-service carriers to turn a profit on marginal routes.

Of his feed plan, Mr O’Leary said: “It’s a demonstration of how we can feed a legacy carrier. If we can do it in Dublin, why can’t we do it in Italy, why can’t we ultimately do it in Germany with Lufthansa? This is absolutely the way forward for the industry.”

He said his airline has not completely given up on offering long-haul flights of its own, while reiterating that the plan was not high on his list of priorities given the record order backlogs at plane-makers Boeing and Airbus Group.

“When Boeing and Airbus have 80 or 100 spare slots for long-haul aircraft that they desperately want to shift at a low cost, we’ll jump on it. But we’re not going to kill ourselves at the moment when their order books are full out to 2020-2021.”

Ryanair has also been concerned about American opposition to low-cost flights into the US operated by Norwegian Air Shuttle, Mr O’Leary said, while adding that the Scandinavian carrier now appeared to have established key principles that other airlines could benefit from.

Ryanair is separately offering partners the ability to sell tickets via its own web portal as the chief executive looks to boost the company’s online presence and make it what he calls “the Amazon of travel”.