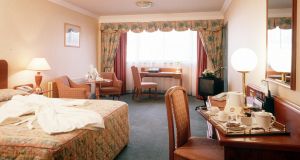 It is not just in Ireland where hotel prices are rising but in Europe too, though at a slower pace. During the first seven months of the year prices have risen 3.6 per cent and the average daily rate (ADR) is €109.71. Occupancy levels have also increased by 1.9 per cent to an average of 70.6 per cent. The largest year-on-year increase is in eastern Europe which saw rises of 6.4 per cent and rates of €78.26. In western Europe rises are slower for ADR at 0.8 per cent and €116.76. In London despite the terrorists attacks, preliminary data for July shows growth of 6.6 per cent and average rates of £165.42 (€181). STR, the hotel benchmarking company, also reports a 22 per cent increase in the hotel construction in Europe this year, adding a total of 77,280 rooms. Other European cities currently seeing major hotel developments are Moscow (3,602 rooms in 16 projects), Munich (2,987 rooms in 13 projects) and Amsterdam (2,166 rooms in 12 projects).

Emirates Airline is celebrating the arrival of its 100th A380 aircraft with special fare offers for flights booked between now and September 13th for travel up to December 7th. Economy passengers can save up to €100 on fares and business-class passengers save €380. The new addition brings to more than 260 the number of aircraft Emirates has in the skies. It is the world’s largest operator of the world’s largest passenger plane, with an onboard capacity of up to 615 passengers.

Delays at European airports were in excess of two million minutes in July due to air-traffic control and capacity. The chiefs of Europe’s carriers, through Airlines for Europe, have complained in a joint letter to the European Air Navigation providers (ANSPs) about the delays. The increase represents 12 per cent on last year and 35 per cent on the previous year, 2015. Excessive ATC regulations this summer have meant that airlines have had to fly longer routes or the numbers of flights on certain routes have been restricted. This has been causing knock-on effects throughout the network, including crews going “out of hours”, which translates into frustrating delays for passengers.

United Airlines is the first US carrier to offer an Alexa skill for customers to learn about flight status and check in. The new skill for Amazon Alexa allows passengers to use their Alexa-enabled devices such as Amazon Echo and Amazon Echo Dot to check in and ask a variety of questions about their flights and learn about amenities on board. You can also find flight information on the United app, which has been downloaded 29 million times.