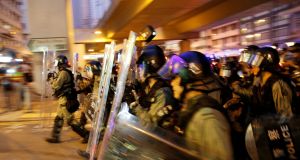 Organisers of a Hong Kong rally planned for outside the airport offices of Cathay Pacific on Wednesday moved the protest downtown after police withheld permission and the airline warned against an illegal demonstration.

The Hong Kong Confederation of Trade Unions (HKCTU) changed the venue of the protest, targeting Cathay staff dismissals and an atmosphere described as “white terror”, to the central financial district to ensure safety, it said on its Facebook page.

“White terror” is a popular Hong Kong phrase used to describe anonymous acts that create a climate of fear.

The carrier said in a statement late on Tuesday police had banned the planned protest around Cathay City, its airport headquarters, adding it had zero tolerance for “violent activities” and any staff who took part.

Cathay has been caught in the crosswinds between authorities in Beijing and anti-government protesters who have staged sometimes violent demonstrations since June that have grown to pose the former British colony’s biggest challenge since it returned to Chinese rule in 1997.

China demanded it suspend staff involved in, or who support, the demonstrations. At least 20 pilots and cabin crew have been fired, the HKCTU said.

“Cathay Pacific wishes to emphasize that it fully supports the upholding of the Basic Law and all the rights and freedoms afforded by it,” the airline statement said, referring to the mini-constitution under which Hong Kong is ruled.

The protests in the Asian financial hub have posed the biggest challenge for Communist Party rulers in Beijing since president Xi Jinping took power in 2012. Authorities in Beijing have sent a clear warning that forceful intervention is possible to subdue the violence.

Unrest escalated in mid-June over a now-suspended extradition bill that would have allowed people to be sent to mainland China for trial in Communist Party-controlled courts.

It has since evolved into calls for greater democracy under the “one country, two systems” formula under which Hong Kong has been administered since 1997, guaranteeing freedoms that include an independent judiciary.

Hong Kong leader Carrie Lam has not ruled out the possibility her administration could invoke emergency powers.

Imposing the Emergency Regulations Ordinance would give Ms Lam wide-ranging powers - from changing laws, authorising arrests, detentions and deportations, to censoring the media - according to legislation on the government’s website.

More protests are planned across Hong Kong in coming weeks, including a general strike on Monday.

Another protest is planned later on Wednesday, after the Cathay Pacific rally, against what demonstrators say is sexual violence by police.

It has been dubbed the “#MeToo” rally and participants are being encouraged to write “#ProtestToo” on their arms with red lipstick.

Police said in a statement on Tuesday they respected the dignity, privacy and rights of people under detention and that they were aware of online “rumours” that a person had been sexually harassed while in custody.

“We have looked into the records and I must emphasize that such rumours are totally false. Also, we have not received any formal reports or complaints,” Police Public Relations Branch chief superintendent Tse Chun-chung said in the statement.

Hong Kong is on the verge of its first recession in a decade, weighed down by the protests and a prolonged US-China trade war.

HSBC said it would offer some help for small and medium-sized companies with a six-month interest rate rebate on loans approved under official financing and loan guarantee schemes, subsidies for applications for the financing guarantee scheme, and reductions in transaction fees for businesses using HSBC’s mobile payment service. – Reuters