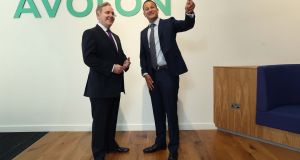 Taoiseach Leo Varadkar with Avolon chief executive Dómhnal Slattery at the opening of the lessor’s new global headquarters in Dublin.

Hong Kong property developer CK Asset Holdings is open to bidding for debt-laden HNA Group’s stake in Irish aircraft lessor Avolon if it were put up for sale.

Gerald Ma, general manager of CK Asset corporate business development department, said CK Asset was open to bulking up its aircraft leasing business, which accounts for 5 per cent of its total revenue, by picking up HNA’s majority stake in Avolon.

HNA’s unit Bohai Capital which holds the stake in Avolon was not immediately available for comment either.

Orix had said in August that only 30 per cent in Avolon was available for purchase.

If HNA sells its stake in Avolon, CK Asset “will bid for it like others do”, Mr Ma said.

“We have a lot of room for spending,” he added, referring to CK Asset’s low debt-to-equity ratio of around 3 per cent.

The outlook for the aircraft leasing market is promising due to growing demand from budget airlines and the fact that 2,000 to 4,000 aircraft will need to retire globally by 2024, Mr Ma added.

The developer is also looking at overseas expansion by investing in office towers, utility assets and infrastructure that can be a recurring and long-term source of income, Mr Ma said.

CK Asset’s effort to transform into an integrated enterprise that deals in multiple businesses come as housing prices in Hong Kong have surged by 200 per cent over the past decade, making it one of the world’s least affordable property markets.

While Hong Kong’s number two property developer by market value will continue to invest in the property markets in the city and mainland China, it will likely be more conservative with its bidding prices, Mr Ma told a small group of reporters.

The company is exploring asset purchases in London, Mr Ma said, adding it had bid for an office tower and an elderly care home but that the bids were unsuccessful.

Last year, it acquired an office tower in London – which is leased to investment bank UBS on a 17-year contract – for $1.3 billion (€1.16 billion), after disposing of a Hong Kong skyscraper in a record $5.2 billion deal.

“Compare the risk and return of these assets to those in Hong Kong: 300 square feet sold for over HK$10 million, how sustainable is that?” Mr Ma asked.

Recurring businesses accounted for more than half its 2018 profit, versus 42 per cent in 2017, showing its efforts to offset the uncertain property outlook were paying off.