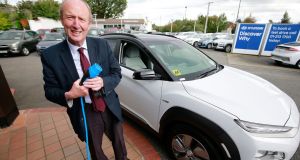 It’s remarkable how the Government has taken the positive momentum behind electric cars and managed to run over its own feet.

Everybody now accepts that electric cars represent the future of motoring. What’s important at this stage is managing the changeover from the current vehicle fleet without financially crippling the motoring public or the public purse.

The Government’s recent climate action plan set a madcap target of 840,000 passenger electric vehicles on the road by 2030. Not only is the number out of kilter with reality, the timeline is a full decade ahead of the deadline set by the EU Commission.

European manufacturers have signed up to the commission’s timeline. They have also committed to be totally carbon neutral in the means of production by 2050.

The decision to jump ahead of the international targets by a decade is not ambitious or innovative: it’s arrogant. It is based on the premise that the global auto industry will accelerate its electric car plans if it wants access to Ireland’s lucrative new car market. And while we understand that global demand for electric vehicles will outstrip supply in the coming years, we will of course be given priority, as the car companies will simply have no choice.

Car bosses are supposed to be be terrified by the thought of missing out on sales in a new car market barely the size of greater Manchester.

This week one of the spending review papers from the Department of Public Expenditure warned the money allocated to increasing the take-up of electric cars will run out by 2021, and that €1.5 billion in existing taxes – raised through motor tax, VAT and excise -–will be lost due to the move to electric vehicles . The annual losses will reach €500 million by 2030 and a balance needs to be struck between increasing the take-up of electric vehicles and maintaining tax revenues.

The department warns that every 100,000 new electric vehicles on the road will cost “the exchequer between €1.14 billion and €1.36 billion”, pitching the cost of the Government’s target at more than €11 billion.

This report and the recent Tax Strategy Group proposals on handling the transition demonstrate there are reasoned and sensible actors in the corridors of power who are well aware of the risks and have put well-considered options on the Cabinet table. We need to hear more from them and less from those whose cack-handed approach to setting targets makes a mockery of the Government’s supervision of the move to electric cars.