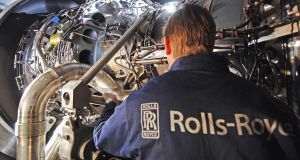 Rolls-Royce last week admitted bribery and corruption stretching over 23 years as part of a £671 million settlement with authorities in the UK, US and Brazil. Photograph: Rolls-Royce/PA Wire

AirAsia, the Malaysian budget carrier, has denied wrongdoing after an inquiry into corruption at Rolls-Royce found that the UK engine-maker failed to prevent its employees from bribing an AirAsia executive with a $3.2 million discount for the maintenance of a private jet part-owned by Tony Fernandes, the airline’s co-founder.

The UK’s Serious Fraud Office charged that Rolls-Royce failed to prevent staff from paying a credit, “despite those employees believing that, in consequence, the AAG executive intended to perform a relevant function improperly”. This discount was given at the request of an AirAsia executive in return for his “showing favour” towards Rolls-Royce in the purchase of products and services, said the SFO.

The $3.2 million credits were provided for a Bombardier Global Xpress business jet owned by Tune Group, the investment holding company set up by Mr Fernandes, the AirAsia chief executive, and his business partner Kamarudin Meranun, AirAsia’s executive chairman, the Financial Times has established.

AirAsia’s denial comes after Rolls-Royce admitted bribery and corruption offences last week – stretching over 23 years and a dozen countries – as part of a £671 million settlement with authorities in the UK, US and Brazil.

The company will not be prosecuted as long as it abides by the terms of the settlement, but UK and US investigators are expected to launch criminal charges against individuals in the coming months.

Sir John Rose, chief executive between 1996 and 2011, has hired Stephen Pollard, partner at Wilmer-Hale, who defended the Barings Bank rogue trader Nick Leeson, to represent him in relation to the probe. The lawyer declined to comment. – Copyright The Financial Times Limited 2017