Airline seeks to tap into European demand for Asian connections 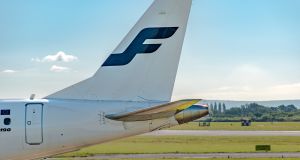 Finnair claims that its flight times between Europe and the Far East are among the shortest available. Photograph: iStock

Finnair plans to add a flight to its Dublin-Helsinki route next winter and will increase summer frequency to nine times a week from March in a further extension of its services from Dublin Airport. The Finnish airline says that from March, it will fly nine times a week between Dublin and Helsinki, an increase on the six flights a week it announced in August. Along with this, it will add an extra weekly flight to its Dublin-Helsinki winter schedule, bringing that to seven a week.

Andrew Fish, Finnair’s general manager for the UK, Ireland and Benelux, said: “We are very pleased to increase capacity on our Dublin route, as well as other short-haul destinations.”

Finnair is bidding to tap into growing demand for services to the Far East by scheduling its Dublin-Helsinki flights to allow quick connection to destinations in Asia. The airline says it offers some of the quickest times from Europe to the Far East as it flies from Helsinki over the Arctic Circle to Asia, a shorter route than that taken by most other carriers.

Including the three-hour flight time to Helsinki, Finnair maintains that its journey from Dublin to Beijing takes 14 hours, Tokyo takes 15 hours while Hong Kong takes 13 hours and 25 minutes. Dublin Airport handled a record 27.9 million passengers last year and hopes to top that number in 2017.