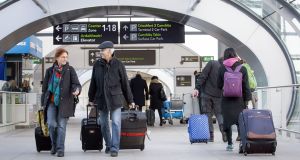 Short-haul traffic rose 11 per cent to 24.3 million passengers at Dublin Airport last year, while the number of long-distance travellers grew 12 per cent to 3.6 million.

Almost 28 million people travelled through Dublin Airport in 2016, which was a second consecutive record-breaking year for the gateway.

The State-owned airport confirmed on Thursday that it handled 27.9 million passengers last year, 11 per cent more than the 25 million who used Dublin in 2015.

Both 2015 and 2016 set new records for Dublin Airport. Traffic grew by a total of 6.2 million passengers, or 29 per cent, over the two-year period.

Managing director, Vincent Harrison said that numbers grew across all of the airport’s biggest markets in 2016 while it added both new routes and airline customers.

He pointed out that the growth helped boost both tourism and trade. Short-haul traffic rose 11 per cent to 24.3 million passengers, while the number of long-distance travellers grew 12 per cent to 3.6 million.

Almost all of Dublin’s airlines grew their businesses at the airport in 2016, and a number posted record performances.

“Those extra passengers have created an estimated 5,200 additional jobs on the Dublin Airport campus over the past two years.” Mr Harrison said.

Dublin was the fifth-biggest airport in Europe for north American traffic in 2016 after Heathrow, Paris, Frankfurt and Amsterdam.

The news prompted Mary Rose Burke, chief executive of business lobby group Dublin Chamber of Commerce, to call on Minister for Transport Shane Ross to speed up development of the proposed €2.4 billion Metro North rail line from the city centre to the airport.

She pointed out that the airport’s reaction to faster-than-expected growth had been to prioritise the construction of a new runway. Work is due to get under way on this project later this year.

“The Minister for Transport must now show the same sense of ambition to ensure that the Metro North link between Dublin city centre, Dublin Airport and the rapidly-expanding north Co Dublin area is built much quicker than the previously-mooted target of 2027,” Ms Burke said.

She added that the new rail line was was needed to support both the airport and the 40,000-plus people who will be commuting from north Co Dublin to the city by 2023.