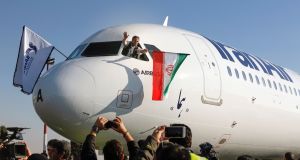 An Airbus A321 airliner arrives at Tehran’s Mehrabad airport. It is the first of 100 planes to arrive under a deal in December worth $18 billion. Photograph: Atta Kenare/AFP/Getty Images

The first of 100 Airbus planes that Iran is expected to receive after its historic nuclear deal with world powers ended some sanctions has landed in the capital Tehran.

The arrival heralds the beginning of a new chapter for the Islamic Republic’s creaking and accident-prone aviation industry, which was hobbled by years of sanctions that left carriers struggling to secure spare parts.

Iran Air’s brand new A321 jet touched down at Tehran’s Mehrabad International on a flight from Airbus headquarters in Toulouse, France. The 189-seat plane, decked out in Iran Air’s blue-and-white livery, is the first of 100 planes purchased under a December deal worth $18 billion (€16.9 billion).

With international economic sanctions lifted after the 2015 historic nuclear agreement between Iran and world powers, Iran is seeking to rapidly upgrade its ageing and obsolete air fleet.

Most of Iran’s fleet of 250 commercial planes was purchased before 1979 and, as of June, only 162 were operational, with the rest grounded because of a lack of spare parts. Iran Air, whose website lists a fleet of 43 planes, offers direct flights to more than 30 international destinations, including London.

That deal was Iran’s biggest yet with an American company since the 1979 revolution and US embassy takeover. It calls for 50 Boeing 737s and 30 Boeing 777s to be delivered over the next decade. Iran Air is also expected to seal an order for 20 turboprops from European manufacturer ATR.