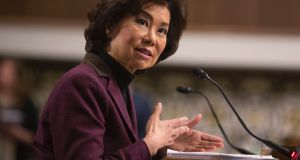 Incoming head of the US department of transportation Elaine Chao declined to take a position on Norwegian Air International’s entry into the country. Photograph: Chris Kleponis/AFP/Getty Images

Elaine Chao, incoming head of the US department of transportation, declined at a US Senate hearing to take a position on Norwegian Air International’s entry into the country, in what is seen as a boost for the Irish-registered airline.

Ms Chao is US president-elect Donald Trump’s choice for transportation secretary, giving her an influential role over aviation and a likely say in whether he should block her department’s recent decision to grant Norwegian a licence to fly to the United States.

Quizzed at a senate approval hearing on various policy issues, Ms Chao declined to take a position on Norwegian’s bid to enter the US market. The decision to grant it a licence aroused the ire of aviation and transport unions, who formally opposed its application.

Her decision not to take a position was seen as positive for the airline. While the department of transportation granted it a foreign carrier’s permit in December, it is still open to Mr Trump to block this approval.

A recent letter from more than 100 congress men and women to Mr Trump called on him to use this power and either block or stall the granting of a licence to the airline.

The carrier’s parent, Norwegian Air Shuttle, plans to use the Irish-based subsidiary to launch cut-price flights between cities in the European Union and United States, including services linking Cork and Shannon to airports near Boston and New York.

Ms Chao and her department could also have an impact on the fortunes of another Irish company, CRH, whose North American arm is one of the biggest suppliers of road surfacing material asphalt and building products in the US.

Mr Trump plans to spend $1 trillion (€940 billion) repairing the US’s roads and infrastructure in what could prove to be a boost to CRH’s subsidiaries. Ms Chao will oversee the programme as transportation secretary.